When my older son, Noah, was only five (a few years ago), he had already discerned one of the core meta-patterns of his dad's evolving pattern of imagery. Noah happily explained to anyone who inquired about "what that strange man with a tripod..." is doing, that..."That's just my dad; he likes to take pictures of rocks, leaves and water."

Later, of course, Noah's sense of his dad's meta-pattern grew deeper and ever more sophisticated; passing though "my dad likes to catch subtle light as it falls on dilapidated buildings,", stalling, for a while, on "my dad likes to take pictures of boring stuff," and eventually settling on "my dad likes gentle, quiet scenes." I am often greatly impressed with the depth of my son's young perception of my meta-patterns, and his eloquence in expressing them.

The three photos appearing here - all taken this past weekend at (the Virginia side of) Great Falls Park - are very firmly in the "rocks, leaves and water" class of meta-patterns; which is what I find myself going back to whenever I need to creatively recharge myself.

Patterns, meta-patterns and meta-meta-patterns may all come and go (and I hope they do keep coming and going, for change and evolution are the lifeblood of creation); but the pattern that repeats most often, and the one pattern that inevitably remains when the conscious "I" stops thinking, is what my son has known since he was five: "Dad just likes to take pictures of rocks, leaves and water."
Posted by Andy Ilachinski 2 comments:

A few months ago, I posted an image of a "door" (reposted on the left) that reminded me of Kafka's well-known parable of "Before the Law."

A few months after that image was taken (in late winter), I had a chance to revisit the same area and reshoot the same door, just as spring had arrived. I was delighted to come upon another Kafkaesque scene, both obvious and subtlety paradoxical.

The door had apparently come to life, with new vines and branches sprouting leaves and gently embracing the withered old structure, as if to newly nurture and support it. But the door was also mysteriously receding into the background, and was engulfed in the new "life" emerging all around it; almost as though it were being "eaten" by it. Its time had clearly passed, as it now journeys into the even more mysterious recesses of time and memory.

Where did the doorkeeper go?, I wonder; and where did this door really lead?

Assuming that the most meaningful role photography plays as an art form is as an "aesthetic language" that an artist may use to express his/her feelings (rather than as simply a vehicle for strict representational recreation of physical phenomena), it follows that if an obviously colorful scene unfolds itself for an artist in some way other than by its color (say, by its forms and/or tones), then a B&W "expression" of that otherwise colorful scene may be the preferred vehicle of communicating the emotion felt during the act of capture.

For me, such is clearly the case for the two images displayed here. In both cases, the color versions contain many sutble and beautiful tones of yellow and orange; and each color version properly and unmistakenly conveys a sense of autumn. However, in neither case was color responsible for grabbing my attention.

In the first image (at the top), I was drawn to the meloncholic, decaying leaves and the reflected form of a tree with its bare truck and branches. While a lovely sepia-like sheen marked the surface of the water, and there was a hint of an orange and brown "glow" beneath (which, together, instilled a sense of detached nostalgia), it was the purity of shapes and tones alone with which I made a personal connection; and through which I resonated with autumn's slowing energy.

In the second image (below), I witnessed (and experienced) a fleeting convergence of subtlety interpenetrating worlds; worlds not of color per se, but - again - of gentle forms and tones.

It was only after a long quite gaze at this serene self-contained world (surrounded by cliffs and massive boulders that I've deliberately left out of the small composition) that I eventually noticed how much the bright yellow leaves floating on the water stood out from the rather muted brown tones that had them surrounded.

For me, in that mysterious moment of meditative, inner reflection and understanding, there was no separation between leaves and water; or between foreground and background. I felt the quiet rhythm of the scene; nonpartitioned, unlabeled, uncategorized, and undifferentiated. Indeed, I might argue that the color, when I finally did see it, actually disturbed the essence of what I "saw" and was far - far! - from necessary for my being able to experience it.

Thus, it is the B&W version - and not the color! - that best conveys a sense of what I felt when I looked down at this little scene; and, insofar as these images themselves capture a part of my experience of autumn, here then is a bit of autumn, as revealed by two humble Black & White abstracts.
Posted by Andy Ilachinski 4 comments:

Autumn is that beautiful time of year during which I both rejoice in nature's wondrous colors and am reminded of (and sadly lament) my ongoing struggles to reproduce them in fine-art print form.

As I've revealed in several past posts, I generally shy away from color prints (or color photography of any kind for that matter!) for two reasons: (1) I do not generally see the world in color (being naturally predisposed to forms and tones), and(2) I am (still) unable to "previsualize" (ala Ansel Adams) the final color print.

While I on occasion get "lucky" and produce a serviceable print, I am not even close to being able to accomplish this with any predictable regularity. Thus, I both eagerly await the emergence of autumn's remarkable palette, and prepare myself for the inevitable challenge of - and, usually, the ensuing disappointment in my inability to - properly render what my "eye/I" really saw/felt.

Sprinkled here are a few "autumn color abstracts" that caught my eye and lens. However, please be warned that the images appearing here were created using the Adobe RGB color space, and not sRGB (which is the default viewing space for web pages) that you are likely viewing them with. Thus, the beautiful fall colors (which you'll have to take my word really existed! ;-) unfortunately appear very muted here. Nonetheless, I hope the images convey some sense of fall's beauty. 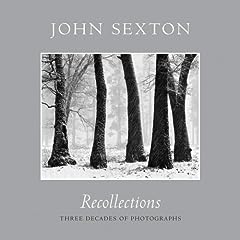 Though I own hundreds of photography books, and regularly peruse most of them for years, I have had a relatively few "Wow!" reactions over the years - indeed, the last such experiences are at least two decades old (!): to Bruce Barnbaum's late 1970s' Visual Symphony and, in the middle 1980s, to Fay Godwin's Land - but Sexton's new Opus not only evoked an immediate heartfelt "Wow!" from me, it also raises the bar on what will trigger a similar exclamation from me in the future. I sat transfixed for hours after receiving it in the mail yesterday, and already consider it a sacrosanct member of the deepest core of my photography library. It is truly an extraordinary work of art; one that I will be savoring - and learning from - for years to come.

In short, a masterpiece!
Posted by Andy Ilachinski 2 comments: