What Else a Thing Is 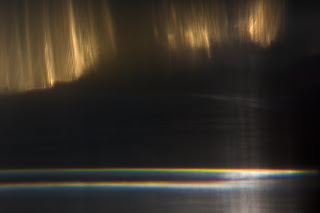 Since the beginning of the year, I have posted about a dozen and a half images from a (still evolving) portfolio with the tentative title Synesthetic Landscapes. The concept for this portfolio actually dates back to Thanksgiving 2009 (which my family and I celebrated in my in-laws' home in Coral Gables, Florida, and which I can date so precisely because it is the time my eye was first drawn to color-infused reflections in my mother-in-law's Nambe-like metal salt and pepper shakers). So the portfolio by now contains many more images than those I have had time to post. Indeed, I will likely self-publish a selection using Blurb. What I wish to explore a bit in this post, however, is - if you, kind reader, will indulge my usual predilection for philosophical musings and/or ramblings - is what my experience of capturing images for this portfolio reveals about the fundamental nature of "what a thing is, is-not, and may-be." It depicts a story that has many variants and reaches back into Jain, Buddhist, Sufi and Hindu stories. The poet John Godfrey Saxe immortalized the core idea for the western world in his poem "The Blind Men and the Elephant," that starts out...


It was six men of Indostan
To learning much inclined,
Who went to see the Elephant
(Though all of them were blind),
That each by observation
Might satisfy his mind

...and (eventually) has the men "see" the elephant as a wall, snake, spear, tree, fan or rope, depending on what part of the elephant's body they touch and probe...


And so these men of Indostan
Disputed loud and long,
Each in his own opinion
Exceeding stiff and strong,
Though each was partly in the right,
And all were in the wrong!


A wikipedia article highlights some of the many uses this story (in all its myriad forms) has had as a metaphor in physics, biology, and religion. I view it as a provocative stepping stone for asking (for the moment, in the context of photography, but ultimately probing something rather deeper): "What is a 'thing' really?", or - better - "How fundamental an understanding of 'reality' does our privileged 'view' of it provide us with?"

Suppose you are asked to take a picture of a water glass (say, from the kitchen). What would you do? The simplest, most obvious, approach is to point your camera in its general direction and go "click." The result is a photograph of a glass, but - like the blind men groping at the elephant - the glass will have been captured from a single vantage point, using a fixed aperture and exposure time, with perhaps a filter sandwiched between the glass and our lens (maybe a polarizer to "cut out" some of the glare). Assuming the photograph is technically well executed, it can certainty serve as an adequate representation of  the glass, and others may use your image as a "symbol" to denote the "real" glass. But what - and how much - of the "glass" (and everything it "means" as an object in this universe) have you actually captured in your photograph? Your image is less an "image of the glass" than it is an "image of the glass taken by [substitute your name] taken on date D under conditions C using camera X with setting S." Your image - any image - is but one possible image of essentially an uncountable number of possible images that could have been taken of the glass.

Which image 'best' represents the glass? None, all, and one, depending on one's point of view and ontological predilections. The answer is none, because "privileged observers" are an anathema (at least to physics). There can be no "best" observer, or "best" image. Images may contain more or less useful information (for a certain goal), but - absent such an externally imposed constraint; i.e., an external aesthetic - no one image is "better" or "worse" than any other. The answer is all, because if an objective measure of "better" or "worse" cannot be defined, each image must be treated equally, and the set of all possible images - collectively - objectively defines (the visual representation of) the colored glass. And the answer is one, because there is always at least one aesthetic at play, namely that of the photographer. The photographer is a de facto privileged observer, and the "best" image is the one that best reflects the photographer's aesthetic.

The caveat is that the resulting picture is not necessarily a picture of a "glass" (since the photographer may wish her image to convey something entirely different). Rather, it is a "picture of a glass taken by photographer X (at time t) for purpose P." This ontological distinction is often overlooked. Because an image is itself a physical thing and conveys information about another physical thing, we tend to interpret what we see in pictures literally: "this image shows a glass, and now, having seen it, I 'know' what this glass looks like and therefore what it is." And yet, this is so obviously not so. Taking a cue from the blind men and their elephant, we ask: What other "views" of this glass could we have, under what conditions (of the glass and our own inner thoughts and feelings), such that we gain a fuller, more complete, understanding of what the glass really is?

What does all of this have to do with images on this page and kitchen glasses? These images, along with the last 16 or so Synesthetic Landscape images that I've posted on my blog in the last few months, are all "privileged views" of colored water glasses borrowed from my family's kitchen (captured using either Canon's EF/100mm or extraordinary MPE/65mm macro lenses, and using only naturally reflected, transmitted, and refracted light, no "Photoshopping"). Yet none of them depict a "glass" as such (indeed, I hope that for most viewers this will come as an unexpected revelation of what the images "really" are ;-) They are all attempts to pay homage to Minor White's well-known credo to take pictures of "what else" a thing is. Pictures of colored water glasses they all may be, but they are also each fleeting glimpses of other-wordly realms, of wild aurora borealis, arctic seascapes, sunsets, spring and summer meadows, and deserts. And, as well, they are - collectively - all snapshots of my ongoing efforts to grope my way toward understanding what a "water glass in my family's kitchen" really is.

I also imagine that somewhere in these synesthetic sunsets and meadows there is an image of the very same water glass that got me started on my aesthetic journey. And deeper still lies an image - only an image? - of my own eyes staring back at me. What is "more" or "less" real: the glass, the meadow, or the photographer? And are there - really - truly meaningful distinctions to be drawn among the three? Or is the universe but a vast, ineffable, self-created, ouroborian broth of nested self-perceptions? A recursive loop of void and substance? The elephant groping for its own meaning? A cosmos observing itself observing?
Posted by Andy Ilachinski 7 comments: