Why is the sky blue?

"[Why is the sky blue?] ... It’s a question every toddler asks, but it is also one that most great scientists since the time of Aristotle, including da Vinci, Newton, Kepler, Descartes, Euler, and even Einstein, have asked... One of the things I like most about this explanation—beyond the simplicity and overtness of the question itself—is how long it took to arrive at correctly, how many centuries of effort, and how many branches of science it involves.
Aristotle is the first, so far as we know, to ask the question about why the sky is blue, in the treatise On Colors; his answer is that the air close at hand is clear and the deep air of the sky is blue the same way a thin layer of water is clear but a deep well of water looks black. This idea was still being echoed in the 13th century by Roger Bacon. Kepler too reinvented a similar explanation, arguing that the air merely looks colorless because the tint of its color is so faint when in a thin layer. But none of them offered an explanation for the blueness of the atmosphere. So the question actually has two, related parts: why the sky has any color, and why it has a blue color.
...
The sky is blue because the incident light interacts with the gas molecules in the air in such as fashion that more of the light in the blue part of the spectrum is scattered, reaching our eyes on the surface of the planet. All the frequencies of the incident light can be scattered this way, but the high-frequency (short wavelength) blue is scattered more than the lower frequencies in a process known as Rayleigh scattering, described in the 1870’s. John William Strutt, Lord Rayleigh, who also won the Nobel Prize in physics in 1904 for the discovery of argon, demonstrated that, when the wavelength of the light is on the same order as the size of the gas molecules, the intensity of scattered light varies inversely with the fourth power of its wavelength. Shorter wavelengths like blue (and violet) are scattered more than longer ones. It’s as if all the molecules in the air preferentially glow blue, which is what we then see everywhere around us.
Yet, the sky should appear violet since violet light is scattered even more than blue light. But the sky does not appear violet to us because of the final, biological part of the puzzle, which is the way our eyes are designed: they are more sensitive to blue than violet light.
The explanation for why the sky is blue involves so much of the natural sciences: the colors within the visual spectrum, the wave nature of light, the angle at which sunlight hits the atmosphere, the mathematics of scattering, the size of nitrogen and oxygen molecules, and even the way human eyes perceive color. It’s most of science in a question that a young child can ask."
- Nicholas Christakis (1962 - )
This Explains Everything (John Brockman, ed., 2013)
Posted by Andy Ilachinski No comments:

"The brown autumn came. Out of doors, it brought to the fields the prodigality of the golden harvest, —to the forest, revelations of light,⁠—and to the sky, the sharp air, the morning mist, the red clouds at evening. Within doors, the sense of seclusion, the stillness of closed and curtained windows, musings by the fireside, books, friends, conversation, and the long, meditative evenings. To the farmer, it brought surcease of toil,⁠—to the scholar, that sweet delirium of the brain which changes toil to pleasure. It brought the wild duck back to the reedy marshes of the south; it brought the wild song back to the fervid brain of the poet. Without, the village street was paved with gold; the river ran red with the reflection of the leaves. Within, the faces of friends brightened the gloomy walls; the returning footsteps of the long-absent gladdened the threshold; and all the sweet amenities of social life again resumed their interrupted reign." 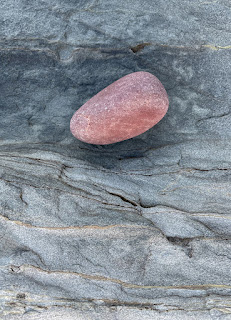 "As an object prone to fertilization, the egg is an appropriate symbol and metaphor for the idea of potentiality. It is pre-creation chaos waiting to become cosmos. In psychological terms, it is the preconsciousness of the given culture – the collective being waiting to be made conscious of itself. To quote psychologist Marie Louise von Franz, 'we can easily recognize in it the motif of preconscious totality. It is psychic wholeness conceived as the thing which came before the rise of ego consciousness, or any kind of dividing consciousness'. In short, the egg is a symbol of pre-differentiation, differentiation being the essence of the creation of anything. The egg contains within itself male and female, light and dark, all opposites in a state of union. It is perfect entropy and signals the existence of creative power from the very beginning. By extension, the cosmic egg is a symbol of the individual’s preconscious state before the process of individuation allows for the hatching of Self."
- David A. Leeming (1937 - )
Cosmic Egg
Posted by Andy Ilachinski 2 comments:

A Moment or Two to Just Be 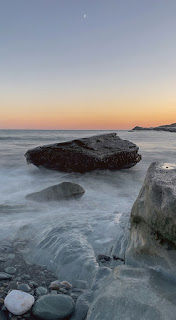 "While I sit here, I don’t beg to be somewhere else; I’m not pulled away by the future or by the past. I sit here, and know where I am. This is very important. We tend to be alive in the future, not now. We say, ‘Wait until I finish school and get my PhD; then I’ll really be living.’ Once we have it – and it wasn’t easy to get – we say to ourselves, ‘I have to wait until I have a job for my life to really begin.’ Then after the job a car, and after a car a house. We aren’t capable of being alive in the present moment. We tend to postpone being alive to the future, the distant future, we don’t know when. It’s as if now is not the moment to be alive. We may never be alive at all in our entire life. The only moment to be alive is in the present moment."

Postscript. The picture above was captured not with my "real" camera but with my iPhone, whose ability to capture scenes such as this continues to impress. I was on a short "day job" related trip to the beautiful town of Newport, RI, and had a few precious moments of magic hour light at the Sachuest Point National Wildlife Refuge (just a few miles from the center of town). I was initially despondent over having not taken my real camera (and rationalized the "complexities" of mixing business with pleasure; what, with a laptop and pounds of technical notes already stuffed into my carry-on). I then got even more melancholy over having neglected to take my other "real" camera that I bought specifically for this purpose (an absurdly tiny but equally as absurdly capable digital camera I wrote about earlier this spring). But then I remembered Thich Nhat Hanh's sage advice (quoted above). Stilling my mind as best I could, and clutching my iPhone, I managed to find a moment or two to just be.

A Little Round Grain of Rock

"I perceived that I was on a little round grain of rock and metal, filmed with water and with air, whirling in sunlight and darkness. And on the skin of that little grain all the swarms of men, generation by generation, had lived in labour and blindness, with intermittent joy and intermittent lucidity of spirit. And all their history, with its folk-wanderings, its empires, its philosophies, its proud sciences, its social revolutions, its increasing hunger for community, was but a flicker in one day of the lives of the stars." 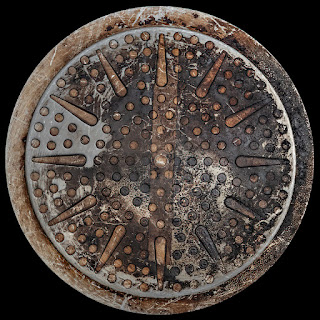 "We are living in a culture entirely hypnotized by the illusion of time, in which the so-called present moment is felt as nothing but an infinitesimal hairline between an all-powerfully causative past and an absorbingly important future. We have no present. Our consciousness is almost completely preoccupied with memory and expectation. We do not realize that there never was, is, nor will be any other experience than present experience. We are therefore out of touch with reality. We confuse the world as talked about, described, and measured with the world which actually is. We are sick with a fascination for the useful tools of names and numbers, of symbols, signs, conceptions and ideas."

"Every unique thing in nature is related to the whole, and partakes of the perfection of the whole. Each particle is a microcosm, and faithfully renders the likeness of the world. In geometric harmony of the cosmos there are ways that resemble, there are universal patterns, from blood vessels, to winter trees or to a river delta, from nautilus shell to spiral galaxy, from neurons in the brain to the cosmic web. A whole universe of connections is in your mind – a universe within a universe – and one capable of reaching out to the other that gave rise to it. Billions of neurons touching billions of stars – surely spiritual."