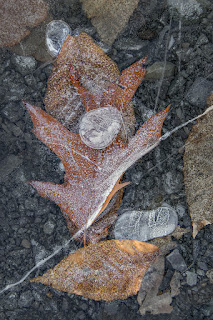 "As has been seen, fragmentation originates in essence in the fixing of the insights forming our overall self-world view, which follows on our generally mechanical, routinized, and habitual modes of thought about these matters. Because the primary reality goes beyond anything that can be contained in such fixed forms of measure, these insights must eventually cease to be adequate, and will thus give rise to various forms of unclarity or confusion. However, when the whole field of measure is open to original and creative insight, without any fixed limits or barriers, then our overall world views will cease to be rigid, and the whole field of measure will come into harmony, as fragmentation within it comes to an end. But original and creative insight within the whole field of measure is the action of the immeasurable. For when such insight occurs, the source cannot be within ideas already contained in the field of measure but rather has to be in the immeasurable, which contains the essential formative cause of all that happens in the field of measure. The measurable and the immeasurable are then in harmony and indeed one sees that they are both ways of considering the one and undivided whole."

Harmonious Unit in Itself 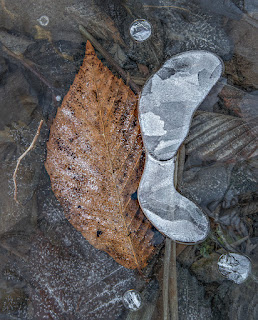 "There is not a
fragment in all nature,
for every relative fragment
of one thing is a full
harmonious unit in itself."
- John Muir (1838 - 1914)
Posted by Andy Ilachinski No comments: 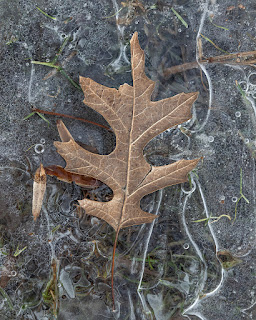 -  William Golding (1911 - 1993)
Postscript. Regular followers of my blog will have noticed by now my recent focus on "leaves in ice"  abstract-like compositions. Of course, most of this has to do with the fact that the seasonal weather (in northern VA) has just not allowed any other kind of photography. But another important reason is that the morning walks my wife and I have been regularly taking through our neighborhood since the start of the (seemingly, never ending) pandemic have over time uncovered a kind of aesthetic bestiary that I've learned to both appreciate and revel in. Quiet little scenes that would normally be "invisible" (literally, since there are parts of our neighborhood I've rarely been in before we started our walks) have gradually revealed themselves - and their compositional possibilities - to me; microcosms of an ethereal beauty all their own. I hesitated taking "real" photographs for a long while (apart from a few quick snapshots with my iPhone). While the natural galleries of haphazardly arranged Kandinskian forms and colors  mesmerized and fascinated me (and, obviously, have continued to do so), I was unsure of my ability to find compositions in such "busy and confusing" cacophonous worlds. But after each walk ended, and my work day got started, I soon noticed myself thinking more and more about lost opportunities. And so, eventually, inevitably, I succumbed to the creative process. I embraced the cacophony. These kinds of compositions - in which multiple elements (mostly form and color; less so, luminance) compete for attention - have never come easily to me, but when they work, they are very satisfying 😊. This is also one of those times that I especially miss my dad, the artist, without whom - and without whose aesthetic sage wisdom - I have now been for 20 years (as of this March). His eye for these kinds of compositions was second to none, with perhaps Kandinsky being the sole exception (and to whose art the New York Times once traced my dad's aesthetic lineage).
Posted by Andy Ilachinski No comments: 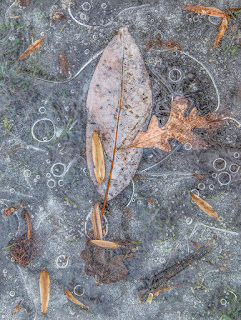 - Alice Walker (1944 - )
"There is no scientific discoverer, no poet, no painter, no musician, who will not tell you that he found ready made his discovery or poem or picture—that it came to him from outside, and that he did not consciously create it from within."

Postscript. There is a small swale (the depression is no more than 6 feet by 10) in the front yard of one of our neighbors that inevitably traps a pool of water after a rain. And whenever a rainfall is followed by a night with sufficiently-less-then-freezing temperatures this "depression with water" turns into a veritable paradise of Kandinskian-composition-like delights! Camera-in-hand (whenever I remember to take it!), I always eagerly rush over to this humble aesthetic oasis as my wife and I set out on our morning walk through our neighborhood. And it never disappoints. Always, there are compositions galore! Quiet unassuming harmonies of contrasting shapes and colors; which for me is what the best (certainly, the most enjoyable spur-of-the-moment) photography is all about 😊
Posted by Andy Ilachinski No comments: 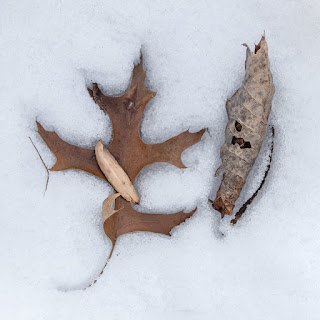 "I should like to propose that we look at this element of freshness, of newness, of strangeness, as a thread along which to place the activities of the consciously creative artist, the conscious patron and critic of the creative artist, and the common man — common in the sense that he has no specified part in creation or criticism. If we make one criterion for defining the artist (as distinct from the craftsman and the trained but routine performer of dance, drama, or music) the impulse to make something new, or to do something in a new way — a kind of divine discontent with all that has gone before, however good — then we can find such artists at every level of human culture, even when performing acts of great simplicity."

"An early morning walk is
a blessing for the whole day."
- Henry David Thoreau (1817 - 1862)
"None of your knowledge, your reading, your connections will be of any use here: two legs suffice, and big eyes to see with. Walk alone, across mountains or through forests. You are nobody to the hills or the thick boughs heavy with greenery. You are no longer a role, or a status, not even an individual, but a body, a body that feels sharp stones on the paths, the caress of long grass and the freshness of the wind. When you walk, the world has neither present nor future: nothing but the cycle of mornings and evenings. Always the same thing to do all day: walk. But the walker who marvels while walking (the blue of the rocks in a July evening light, the silvery green of olive leaves at noon, the violet morning hills) has no past, no plans, no experience. He has within him the eternal child. While walking I am but a simple gaze." 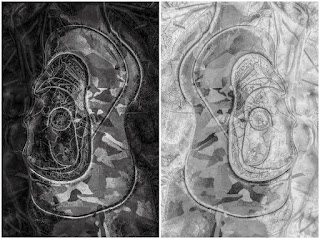 "There are two schools of thought on defining creativity: divergent thinking, which is the formation of a creative idea resulting from generating lots of ideas, and a Janusian approach, which is the act of making links between two remote ideas. The latter takes its name from the two-faced Roman god of beginnings, Janus, who was associated with doorways and the idea of looking forward and backward at the same time. Janusian creativity hinges on the belief that the best ideas come from linking things that previously did not seem linkable. Henri Poincaré, a French mathematician, put it this way: ‘To create consists of making new combinations. … The most fertile will often be those formed of elements drawn from domains which are far apart.’"

Postscript. I have written before about my lifelong penchant for sometimes seeing things not so much visually (at least, at first), but as free-form assemblages of rapid-fire associations and memories that percolate up from my unconscious. A recent example was when an obscure (and certainly not consciously retrievable) passage from a novel by Vonnegut I last read about 30 years ago made my head swivel to look at an equally obscure stain on a piece of driftwood. A similar experience made me look at what in "reality" is nothing but leaves entangled in a bit of ice, but which I "saw" as a melodic string that went, "Janus, Kandinsky, and Yin|Yang." This is close to literal truth. My brain was reacting to this string of associations before I consciously "recognized" what my eye/brain/I was actually looking at! These experiences are far from unique for me, but sadly do not appear very often. But when they do... Ahh, pure magic and joy; a Janusian creative moment, one might say 😊