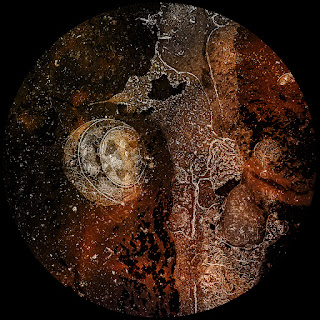 "To get from the tangible to the intangible (which mature artists in any medium claim as part of their task) a paradox of some kind has frequently been helpful. For the photographer to free himself of the tyranny of the visual facts upon which he is utterly dependent, a paradox is the only possible tool. And the talisman paradox for unique photography is to work "the mirror with a memory" as if it were a mirage, and the camera is a metamorphosing machine, and the photograph as if it were a metaphor…. Once freed of the tyranny of surfaces and textures, substance and form [the photographer] can use the same to pursue poetic truth."

Postscript. In full disclosure, and unlike the "fabricated" (and eventually retracted Tweet by) physicist Étienne Klein - who playfully claimed that a photograph he took of a slice of chorizo taken against a black background was that of Proxima Centauri, about 4.2 light years away, as captured by the James Webb Space Telescope - the image above is emphatically not a photograph of some spectacular celestial object! It is, in fact, just a Minor-White-like "poetic truth" rendering of ice-on-asphalt, bathed-in-red-light, as "seen" at some point a few months ago during a winter walk during sunset 😊 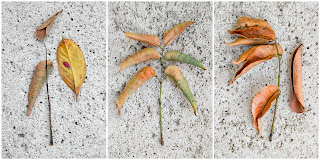 "The soul hungers for expression and ceaselessly strives for an understanding of all that comprises the cosmos. The more of beauty in the mind, the more of peace in the spirit. Time is a definite and moving quantity – conserve it! The structure of life we build for ourselves determines the color of our soul. Think more of yourself, realize your duty to yourself, and your duty to those who shall come after you, who shall shape their lives on your influence. Develop the sense of inner beauty and majesty of Nature." 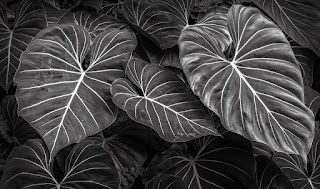 "The study of the pictures of the old masters will show how much they thought of the linear composition, and I hope by some examples of modern photography to show that the value has been appreciated by the producer of them. For the benefit of the tyro I will quote some authorities which go back several centuries. To quote from Hogarth: 'Curved lines are the most beautiful. Nature displays herself in curves; even the straight pine trunk only acts as a foil to the graceful curves of the branches. Therefore, curves should predominate in a picture and where a straight line is introduced it should only be used as a foil to accent the beauty of the curve.'"

Email ThisBlogThis!Share to TwitterShare to FacebookShare to Pinterest
Labels: Leaves

"We tend to think of landscapes as affecting us most strongly when we are in them or on them, when they offer us the primary sensations of touch and sight. But there are also the landscapes we bear with us in absentia, those places that live on in memory long after they have withdrawn in actuality, and such places -- retreated to most often when we are most remote from them -- are among the most important landscapes we possess.
...
We lack - we need - a term for those places where one experiences a 'transition' from a known landscape... into 'another world': somewhere we feel and think significantly differently. They exist even in familiar landscapes: there when you cross a certain watershed, recline or snowline, or enter rain, storm or mist. Such moments are rites of passage that reconfigure local geographics, leaving known places outlandish or quickened, revealing continents within counties.
...
Landscape... can 'enlarge the imagined range for self to move in."

Things Are What They Are 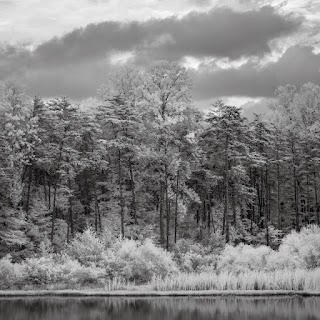 "Please remember: things are not what they seem."

"Things are not as they seem.
They are what they are."

"But one needs to bear in mind
that things are not always what they seem and,
contrary to the dead stillness of a photograph,
reality is in a state of perpetual flux."

"I stand at the seashore, alone, and start to think.
There are the rushing waves…
mountains of molecules, each stupidly
minding its own business… trillions apart…
yet forming white surf in unison.

Ages on ages…
before any eyes could see…
year after year…
thunderously pounding the shore as now.
For whom, for what?…
on a dead planet,
with no life to entertain.
Never at rest…
tortured by energy…
wasted prodigiously by the sun…
poured into space.
A mite makes the sea roar.
Deep in the sea, all molecules
repeat the patterns of one another
till complex new ones are formed.
They make others like themselves…
and a new dance starts.
Growing in size and complexity… living things,
masses of atoms, DNA, protein… dancing
a pattern ever more intricate.
Out of the cradle onto the dry land…
here it is standing…
atoms with consciousness…
matter with curiosity.
Stands at the sea…
wonders at wondering…
...I…
a universe of atoms…
an atom in the universe." 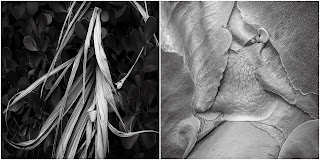 "The very nature of the quantum theory ... forces us to regard the space-time coordination and the claim of causality, the union of which characterizes the classical theories, as complementary but exclusive features of the description, symbolizing the idealization of observation and description, respectively."

"The general opinion in theoretical physics had accepted the idea that the principle of continuity ("natura non facit saltus"), prevailing in the microscopic world, is merely simulated by an averaging process in a world which in truth is discontinuous by its very nature. This simulation is such that a man generally perceives the sum of many billions of elementary processes simultaneously, so that the leveling law of large numbers completely obscures the real nature of the individual processes."

"The plurality that we perceive is only an appearance; it is not real. Vedantic philosophy... has sought to clarify it by a number of analogies, one of the most attractive being the many-faceted crystal which, while showing hundreds of little pictures of what is in reality a single existent object, does not really multiply that object."

"In sixteenth-century South America, the name [Carbuncle, from the Latin carbunculus , ‘a little coal’] was given by the Spanish conquistadors to a mysterious animal - mysterious because nobody ever saw it well enough to know whether it was a bird or a mammal, whether it had feathers or fur. The poet-priest Martín del Barco Centenera, who claims to have seen it in Paraguay, describes it in his Argentina (1602) only as ‘a smallish animal, with a shining mirror on its head, like a glowing coal . . .’
Another conquistador, Gonzalo Fernández del Oviedo, associates this mirror or light shining out of the darkness - two of which he glimpsed in the Strait of Magellan - with the precious stone that dragons were thought to have hidden in their brain. He took his knowledge from Isidore of Seville, who wrote in his Etymologies: 'It is taken from the dragon’s brain but does not harden into a gem unless the head is cut from the living beast; wizards, for this reason, cut the heads from sleeping dragons. Men bold enough to venture into dragon lairs scatter grain that has been doctored to make these beasts drowsy, and when they have fallen asleep their heads are struck off and the gems plucked out.'
Here we are reminded of Shakespeare’s toad (As You Like It, II, i), which, though ‘ugly and venomous, Wears yet a precious jewel in his head . . .’  Possession of the Carbuncle’s jewel offered fortune and luck. Barco Centenera underwent many hardships hunting the reaches of Paraguayan rivers and jungles for the elusive creature; he never found it. Down to this day we know nothing more about the beast and its secret head stone." 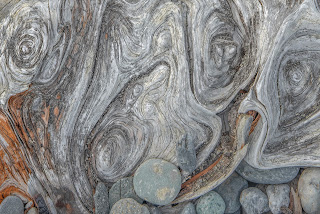 "Although our modern way of thinking has, of course, changed a great deal relative to the ancient one, the two have had one key feature in common: i.e. they are both generally ‘blinkered’ by the notion that theories give true knowledge about ‘reality as it is’. Thus, both are led to confuse the forms and shapes induced in our perceptions by theoretical insight with a reality independent of our thought and our way of looking.
...
The illusion that the self and the world are broken into fragments originates in the kind of thought that goes beyond its proper measure and confuses its own product with the same independent reality. To end this illusion requires insight, not only into the world as a whole, but also into how the instrument of thought is working. Such insight implies an original and creative act of perception into all aspects of life, mental and physical, both through the senses and through the mind, and this is perhaps the true meaning of meditation.
...
Intelligence and material process have thus a single origin, which is ultimately the unknown totality of universal flux. In a certain sense, this implies that what have been commonly called mind and matter are abstractions from the universal flux, and that both are to be regarded as different and relatively autonomous orders within the one whole movement...It is thought responding to intelligent perception which is capable of bringing about an overall harmony of fitting between mind and matter." 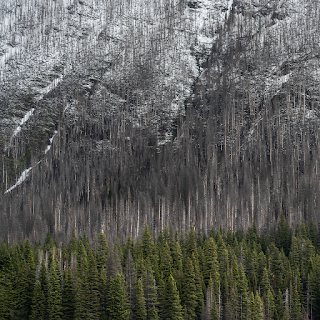 "There's beauty in every tree and every bush.
Just take the time to look at'em.
...
Put light against light -
you have nothing.
Put dark against dark -
you have nothing.
It's the contrast of light and dark
that each gives the other one meaning.
...
We have no limits to our world.
We're only limited by our imagination.
"
- Bob Ross (1942 - 1995)
Happy Little Accidents
Posted by Andy Ilachinski No comments: 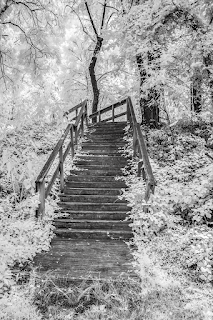 "A pair of wings, a different respiratory system, which enabled us to travel through space, would in no way help us, for if we visited Mars or Venus while keeping the same senses, they would clothe everything we could see in the same aspect as the things of the Earth. The only true voyage, the only bath in the Fountain of Youth, would be not to visit strange lands but to possess other eyes, to see the universe through the eyes of another, of a hundred others, to see the hundred universes that each of them sees, that each of them is; and this we do, with great artists; with artists like these we do really fly from star to star.
...
The real voyage of discovery
consists not in seeing new sights,
but in looking with new eyes 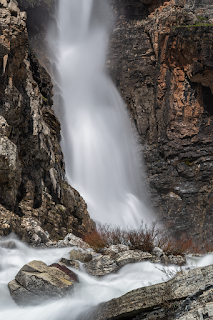 "And now here is my secret,
a very simple secret:
it is only with the heart that
one can see rightly,
what is essential is
invisible to the eye."
- Antoine de Saint-Exupery (1900 - 1944)
Posted by Andy Ilachinski No comments: