A camera is a portal to both ordinary worlds and otherwordly mysterious realms. Sometimes the two coalesce, but only for an instant, and hint at other unfathomable and inaccessible universes; all teasingly poised just beyond the impenetrable boundary between what we see and ... ?

What lies beyond the door of perception? What meets our silent inquisitive gaze as we gently push it open?

Would what we newly see change everything we've ever known? Would the world we leave behind seem as incomprehensible to us as the one we enter? Are all but Shamans truly blind?

How shall we describe what lies beyond? Will our old words and concepts be enough? Or will they merely be useless relics of the past; meaningless symbols of a misaligned reality?

What happens when we discover a new language to express our strange perceptions (assuming that such a language even exists, or that we are clever enough to find it)? Will new categories emerge, subjectively partitioning our world into newly objectified parts?

Or will the new, still unrecognizable abstract forms suddenly revert back to old meanings (or appear to), subtly revealing even deeper recessed mysteries to be explored...?

What was the world like, I wonder, before I stepped into this one? Is there anyone left to understand my answer?

One of the joys of photography, as a public art form, is attending an opening of an exhibit of one's own images; a rare privilege and honor I had on Dec 7, as my family and I greeted invited guests and any and all interested bookstore customers at Books & Books in Coral Gables, Florida. Twenty seven photos were exhibited in all (two are "invisible" in the picture shown above, hidden by the angle of the shot by the protruding wood panel on the left). About a dozen or so were taken in the Miami area; which was no easy task, given that I live in northern Virginia (though visit Miami on a regular basis).


It was fun to both "observe" people looking at my work, and to chat with them about what they "see" (often, and unexpectedly, at great length, with the added benefit of gaining new insights into my own imagery). One individual, for example, a local psychiatrist, was particularly mesmerized by a shot of an old boat on a beach, facing an endless ocean ("Patient Longing").

He pointed out something about this photo that I confess had escaped my notice (at least consciously). Explaining that he had grown up relatively poor in the Dominican Republic, he said this photo evoked strong memories of longing he experienced as a youth. Longing for escape, both physically and psychically. While I could understand why he was drawn to this image, with its obvious symbolism, his reasoning was far subtler than mine. He said he was drawn more by the rope than the boat. While he agreed that the boat conveyed a strong message of longing toward the mysterious, "unknown" horizon, he suggested that the rope injects a deeper melancholy by reminding the viewer that even if the boat were seaworthy (which it may not be), the rope might still prevent a traveler from using it to escape. The two combined - dilapidated boat & rope - were enough to elicit very strong memories of his "longing for escape from entrapment" in his youth. From my perspective, it was enlightening (thrilling even) to hear about how one of my images so touched another person. A perfect example of the power of art to tap into universal patterns and experiences.

On the other hand, I also learned a few lessons about human nature on the other side of the spectrum (the slightly "shallower" end;-) There was a harmless, but misguidedly belligerent, individual who - apart from being dressed as though he had slept three nights at the bus depot (which he may well have done), and apart from the fact that he neither bothered to even glance at the exhibit, nor was polite enough not to pile enough au devours onto his plate to feed a small army (along with a more-than-generous helping of the "free" wine) - proceeded to corner "the artist" (literally, in a corner) to inform me that his pictures are the ones that belong on the wall. As I was desperately trying to think of a witty and pithy response, he snapped open a large wallet of post-card sized snapshots of old photos of Cuba and embarked on an unfathomable soliloquy about his early years as a photographer. "So this is what an opening night of an exhibit is like," I thought to myself. (Thankfully, everyone else I met that night was, Ahem, slightly more socially adept ;-)


The exhibit runs through the end of December. I plan on being back in Coral Gables (and to hopefully chat with a few more interested passer-bys at the exhibit) 24-29 Dec.
Posted by Andy Ilachinski 6 comments: 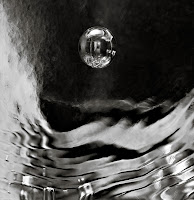 I've been experimenting a bit more with my Indra's Net shots, and have put together a sample portfolio of some of my recent favorites. The portfolio is as much a display of my growing archive of these "micro worlds" as it is a test for a wonderful, and freely available, JAVA-based album creator, called JAlbum.

After installing the program, creating the portfolio could not have been easier. You simply drag your selected images into the JAlbum window (once opened, of course), select an album skin you like (I chose one called LightBox2, drawn to its simple elegance), go through the available options (row, column, display text, EXIF data, and so on), and click make album. I changed the background color and added a few lines of text in a standard HTML editor, but that's about it. Technology as it should be: it's there to provide all you need with minimal hassle, and the artist can just focus on the art. Highly recommended for those of you looking for simple - but elegant - album generators.
Posted by Andy Ilachinski 5 comments: