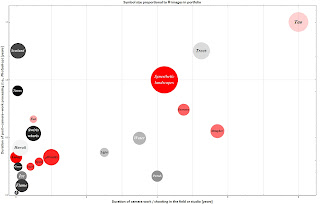 "The great pleasure and feeling in my right brain is more than my left brain can find the words to tell you." - Roger Sperry

As readers of my blog must surely know by now, my "day job" consists of being a principal research scientist for a naval operations think tank. (Operational research - or "OR" for short - has a long and interesting history, some early days of which are wonderfully recounted in a recent biography of Patrick Blackett, who was a pioneer British OR pioneer in WWII; see Blackett's War: The Art of Warfare). So, being an OR analyst/physicist by day, fine-art photographer at all other hours, I am a veritable textbook exemplar of a broad class of creatures best described as quantum superpositions of their left and right brains. While my left brain is immersed in data, equations, computer code, and endless Powerpoint slides full of those d&#n military acronyms and nested lists of bullets (here is Richard Feynman's take on Powerpoint bullets in his autobiographical What Do You Care What Other People Think?, from the passage in the book in which he describes his role during the Space Shuttle Challenger disaster: “Then we learn about 'bullets' - little black circles in front of phrases that were supposed to summarize things. There was one after another of these little goddamn bullets in our briefing books and on the slides.”), my right brain is looking forward to when it will next look through a camera viewfinder, work in Photoshop, and/or do some printing. Normally - actually, almost always - I deliberately keep my conscious self focused on either one or the other side, but never both at the same time, though I appreciate the inevitability of the "other" - inactive - side quietly lurking in some dark corner of my unconscious, never quite "letting go" completely. After all, human-crafted distinctions like "right brain" and "left brain" are crude categories at best and meaningless at worst, and next to useless in providing a genuine insight into who "we" are fundamentally.

Still, every once in a while, it is an informative exercise to welcome the cooperation of both sides of one's brain. To wit, and while "in between" projects (a horrific euphemism for "I've just completed a major project and am in dire need of recharging my creative batteries!"), I've applied some very basic skills I use in my left-brain "day job" - namely, that of data collection and visualization - to help my right-brain better understand what it has been doing for the last 10 years. Note that I use the word "doing" here to embody only those qualities of a portfolio that potentially say something about the type of portfolios that have arisen during this time, in the self-defined context of other portfolios that came before and after a given one, and emphatically not - at least in this blog entry - anything about any aesthetic or philosophical concerns. That is to say, this exercise consists of using exclusively left-brain measures (about my portfolios: their number, subject matter, size, and so) to help my left-brain discover possible latent patterns in what my photographic body of work reveals about what my right-brain has been interested in over the last 10 years.

Toward this end, I've recently let my left brain examine my right brain's last decade's worth of photo portfolios - I count 21 major portfolios (I've left off a few that overlap with prior years), many of which have been published in various magazines - and cataloged the results according to where a given portfolio falls in each of five categories: (1) duration of time of actual shooting using a camera (= x-axis), (2) duration of time spent processing in Photoshop (= y-axis), (3) the size of the final portfolio, measured by total number of images that make up the given portfolio, not the number of raw images from which that final set was eventually distilled (= size of the "point" that is plotted; the overall scale is set by the 125 images that make up my "synesthetic landscape" portfolio), (4) the relative age of a portfolio (the lighter the shade of grey of the point being plotted, the older the given portfolio is), and (5) whether the portfolio has been published and/or (a significant portion has been) exhibited (indicated in red).

The "infographic" shown at the top of this blog entry summarizes my findings, which reveals a few interesting trends (the x and y axes are both expressed in years). First, the durations of my portfolios essentially span the entire 10 years period of my little experiment, with examples that range from literally a day (such as my Luray Caverns portfolio) to a perpetually ongoing series that, not so coincidentally, matches a core theme of my blog (namely "Tao"). Second, except for the Synesthetic Landscapes series, my most recent portfolios (denoted by "disks" that are nearly or close-to being opaque) are relatively short in duration - about a year or less in duration - but cover a wide span of processing times (from about a week to more than a year). For example, while my Scotland portfolio was - of necessity, of course - captured during the 3 week period my wife and I were in Scotland, it consumed significantly over a years' worth of time to process (and still provides many happy hours "reimagining" past shots now, years after our trip in 2009). The same can be said about my Tetons and Yellowstone portfolio. Third, neither the duration nor processing times have much correlation with whether or not a given portfolio was published, as there are representatives of the published set (highlighted in red) that span both sets of axes. Fourth, except for a few small (Megaliths - labeled "5" in the infographic, for no good reason other than it was the fifth portfolio I counted statistics for and its size is too small to permit the title to be shown - and Entropic Melodies) and large (Synesthetic Landscapes) sized outliers, essentially all of my portfolios contain between about 40 and 80 images.

Finally, two observations present themselves about portfolio publications. The first is an obvious but still amusing "insight" that the size of my portfolios has little if anything to do with whether it was published, as both small and large efforts have appeared in print, albeit the result is skewed by a number of publications in Lenswork magazine (whose editorial policy is to either accept a portfolio "as is" in terms of size - whatever the size - or not at all). I am glad to see that I've persevered in completing fairly large sized portfolios (e.g., "Trees" and Swirls, Whorls, and Tendrils) without the "reward" of publications (though, here again, the result is perhaps not all that surprising, given that that is rarely my goal as I work toward completing a given project).

The second observation, and more surprising insight, revealed itself only after digging a bit deeper into what the infographic shows directly. I noticed that each of my portfolios belongs to one of three general types of content, as made clear by their titles. The three types are place (Luray, Hawaii, Greece, Scotland, and Tetons), thing (Ciphers, Glyphs, Megaliths, Flame, Portals, Swirls, and Water), and theme (Entropic Melodies, Metaphor, Micro Worlds, Spirit and Light, Synesthetic Landscapes, Tao, and Geometry). What is surprising is that, of the 9 portfolios that have been published, 7 come from the themed portfolios set; indeed, all 7 in that category have been published! While my sample set of 10 years' worth of work and 21 portfolios is much too small to yield anything but the most rudimentary of observations, it is tempting to speculate that themes generally resonate deeper with viewers (and editors and curators) than do places and things.
Posted by Andy Ilachinski 2 comments: