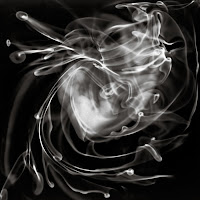 Although I am a physicist by day—or, perhaps, because I am a physicist (and thus want the left part of my brain to rest when I'm with my camera)—I have rarely come upon a subject that seamlessly combines my love of physics and passion for photography. Until now that is. Maybe it is my penchant for abstraction that led to this subject, and the connection to physics is more of an afterthought. Or maybe my physics “eye” unconsciously led me to take on this aesthetically surreal but very “real” physical subject, in hopes of stirring my conscious attention (and relentless equation scribbling). Whatever the case, my recent focus on “ink drop in water abstracts” has consumed both sides of my brain, and is—even as I write this blog entry—unlikely to release either side any time soon. A small—exploratory—gallery of images is here.

Ink diffusion, in turns out, is anything but simple; either photographically or mathematically (for an example of the latter, see, for example, this paper on ink diffusion in Chinese ink paintings). On the photographic side, many photographers—amateur, pro, unknown, famous, living and long forgotten—have doubtless focused their lens’ on “ink & water” countless times, perhaps stretching all the way back to Fox Talbot. I have no illusions of having discovered a new “frontier” (as Bruce Barnbaum did with his magnificent shots of Slit Canyon). But even a familiar subject can sometimes offer unexpected surprises. My own humble addition to photography's collective oeuvre of subject matter is more akin to Hilla and Bernd Becher's typology of watertowers and other industrial structures. Only in my case, it is a typology of the dispersive structures of a single ink drop in water.

The technique is straightforward, but requires a bit of practice and patience. A small 3”-by-3” glass vase is filled with about ¾” of water (less than that, or more, yields a set of slightly “different” patterns from those appearing here) and placed on a light table (which provides the only source of light). A macro lens (in this case, a 100mm lens capable of 1:1 magnification) is mounted on a camera (Canon's 30D DSLR), and is positioned so that the lens is pointing vertically downward on the surface of the water. A small eyedropper is filled with India ink, is carefully centered between three and six inches above the water (as with water depth, a greater or lesser height yields a slightly different set of patterns), and a single drop—this is the "hard" part that requires a bit of patience—is slowly released.

As the ink strikes the water, about a third of its volume quickly spreads radially on the surface. The remaining blob sinks to the bottom. Some of it bounces back up, and a slow process of diffusion, dispersion, and rotation begins. The resulting 3D patterns are captured (and compressed into two dimensions via the lens) as they unfold, and are processed and displayed as digital negatives. A single drop’s effective "unfolding lifetime" varies between 1-1/2 and 2-1/2 minutes. It is not a real lifetime, of course, since the ink continues to diffuse until it is thoroughly mixed with the water, but denotes a period after which most of the "interesting" patterns—the swirls, whorls, and tendrils—have all but dissipated, and no new internal structures appear. The images in this portfolio show the structure of the radial spread of a single drop of ink in water as it appears at a single time (to within ~ 1/60th sec) near the tail end of its unfolding lifetime.

Each ephemeral form is unique, surreal, and exquisitely beautiful. Since these are lifesize macros, many of the fine details are literally invisible to the naked eye. The macro lens reveals what looks like "organic" life-forms, that develop as though some hidden “rule” (or genetic code) is guiding their evolution. In truth, the myriad shapes and forms are a complicated confluence of multiple simultaneous forces at work: diffusion, dispersion, interplay of relative viscosities of the water and ink, a transfer of momentum as the ink drop bounces upward after hitting the bottom of the vase, gravity, random drifts and impurities in the water, and thermal convection rolls due to the heat generated by the bulbs in the light table.

Tellingly, even as each delicate form is “perfect” onto itself, what starts the whole process going, and what is most responsible for the diversity of patterns, is imperfection. It is because the ink drops are not perfect spheres, because they assume a variety of randomly distorted oblong shapes as they fall, and because they have unpredictable and shifting densities of ink inside of them, that each sequence is a unique creation that unfolds just once, then vanishes forever.

"All is process.
That is to say, there is ‘no thing’ in the universe.
Things, objects, entities, are abstractions
of what is relatively constant from a process of
movement and transformation.
They are like the shapes that
children like to see in clouds."
— DAVID BOHM, Physicist (1917-1992)


Postscript/FYI. Apart from the fact that it nicely describes the subject of my new series, the title for this portfolio - "Swirls, Whorls, and Tendrils" - derives, in part, from the first (and, so far as I can remember, the only time) I have ever seen the word "whorl" used seriously in print anywhere. I remember seeing this term in a paper co-authored by one of my mathematical physics professors in graduate school (N.L. Balazs), back in the late 70s; though on a topic that doesn't have anything to do (at least explicitly;-) with ink drops in water: Quantum Maps.
Posted by Andy Ilachinski 5 comments: