Learning to See from the Blind 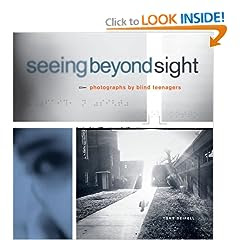 Fine-art photography is first-and-foremost a visual language by which otherwise hidden truths and meanings - of the world and self - are revealed by the observer / artist. As such, it is rarely the case that what a photograph shows on its surface is the complete "message" that the photographer wishes to communicate. Indeed, philosophically speaking, one can say that fine-art photographers use images to provide glimpses of a reality that lies behind (and beyond) what the images represent, as things-in-themselves. Just as letters and words provide the basic units of grammar for literary artists to communicate essential truths that have nothing to do with letters and words, so too do light and form provide the visual grammar by which photographers reveal fundamental truths of nature (and our relationship with it) that have nothing to do with light and form. Art transforms the abject banality of sterile rules, internalized through years of rote memorization and practice, into an intimate expression of the ineffable.


So it should come as no great surprise (though, undoubtedly it will) that the blind - yes, the blind (!) - have much to teach those of us who are sighted about what real "sight" means. The image at the top of this blog entry is of the cover of an extraordinary book called Seeing Beyond Sight, lovingly put together by visual artist, Tony Deifell, and published by Chronicle Books in 2007. The book collects the works of visually impaired children during a five-year program of teaching photography to students at Governor Morehead School for the Blind in Raleigh, North Carolina, from 1992 to 1997. The book has a dedicated website; and an interview with the author has recently been posted on YouTube.

Mr. Deifell quickly addresses the most obvious question: "How can you teach photography to the blind?" On a practical level, even though most of the students involved could not see light, all of them were able to feel the heat due to light. Moreover, blindness does not preclude anyone from achieving a technical understanding of how a camera works, nor of learning the rudiments of good imaging technique. The more difficult question to answer - and what the book so beautifully explains by showing - is "How can the blind take pictures?" In a conventional sense, of course, they cannot; but only if by "taking pictures" we mean using the camera to record what they see visually. However, photography, in its purest form, is so much more than that.


Alfred Steiglitz, Henri Cartier-Bresson, and Minor White - among many other great "photographic seers" - teach us that the finest photography occurs when we are able to (recognize and) capture that special sliver of time during which the boundary between inner and outer experiences vanishes. Steiglitz called such photographs equivalents; Cartier-Bresson referred to the sliver of time as the decisive moment; and Minor White talked often of the profound role that spirit plays in photography:

"Be still with yourself until the object of your attention affirms your presence." - Minor White (1908 - 1976)

But whatever one chooses to call it, the underlying process - for the photographer - is always the same: the camera is merely a mechanical device (and certainly not the only such mechanical device, nor even necessarily the best one to use for this purpose!) that serves to focus our attention (to pressing the shutter) at precisely the right moment when our inner and external experiences align.

"I was thinking that it would be sort of hard for a blind person to take pictures, but it's not very hard. You've just got to listen." (John V., student, quoted on page 48 of Seeing Beyond Sight).

When the "feel is right" - when everything is in its place, when all the compositional elements have snapped into their positions, the shadows and forms are just where they all must be, and when, for the blind, the warmth of the sunlight on the wall is just so, the wind has quieted down, and is no longer heard, the reverberations of distant footsteps are no longer felt, and the texture of the floor is just the right mix of smooth and rugged against the palm of the hand, then we hit the shutter.

Anyone can take a picture of a tree; because that is what is in front of the camera. It takes an artist to use the image of the tree to show you something else about the tree, or something else entirely that has nothing do with the tree per se. Since the visually impaired photographer has difficulty seeing the tree as a tree - indeed, the blind photographer does not see a tree at all - other associations and meanings must necessarily arise that, ultimately, result in some inner train of thought / intuition that concludes with the photographer making the camera go click.

Just as I consider color a "distraction" to the purity of forms and tonalities I try to reveal with my black and white photographs, I can see how light itself can be a distraction if what I am really after is illumination of what light reveals to me (but which I cannot take a picture of directly). It is a great irony - paradox even (!) - of photography that it so deeply but mechanically depends on something (i.e., light) that is, in fact, rarely the focus of its intended message. Even if the light itself is the message (as exemplified by, say, Galen Rowell's lifelong artistic pursuits), the photograph can only capture the effect that light has on whatever environment the photographer has selected to take a picture in, not the light in situ.


There is a touching - or, better, an illuminating - story about a blind student named Leuwynda, who captured a series of wonderful "abstract" photos of cracks in the sidewalk; which she clearly "saw" with her walking cane but which most people are oblivious to. She used her photographs as documentary "proof" of the danger that blind students face in what most would consider uneventfully "short walks" to class, and sent her images along with a letter containing a plea for help to the superintendent. Mr. Deifell muses, on behalf of the rest of us "sighted" photographers, about how many "cracks" there are in the world that we are essentially all blind to?

"If the lights are off, I can see what I'm doing." (Dain, student, quoted on page 138 of Seeing Beyond Sight).

Another student, Josh, produced some soulful photographs of dark, blurry stairs that he used to communicate - via metaphor - a dream he had about being lost and wandering aimlessly in a snowstorm. Other students started using their growing collections of photographs as a means to develop otherwise under-developed communication skills. Merlett, for example, was both blind and learning disabled, and found reading and writing akin to torture. Photography provided a new - and joyous - language in which she could express herself and, as it turned out, tell all the stories she had always wanted to tell others but could not do so in a conventional way.


The book contains a short introduction by the author (and teacher), followed by a selection of student photographs organized into five sections: (1) distortion, (2) refraction, (3) reflection, (4) transparence, and (5) illuminance. It concludes with an afterward, a short FAQ, and a summary of where the students who participated in the project are today.

"How do you not cut people's heads off in a photo? Just ask the person where they are." (Frances, student, quoted on page 112 of Seeing Beyond Sight).

For me, the book (and the project on which it is based) is a revelation. Were it not for the context in which the images in this book were captured, and the accompanying stories of how individual images came to be, one would be tempted to "dismiss" many of the photographs as "amateurish" and merit-less as fine-art. And that would be sadly unfortunate; for these images go to the heart of human experience and artistic expression. They show us what lies beyond the light that illuminates what we take pictures of, and what all photographers - with and without the gift of sight - are trying to reveal with their photography.

Anybody with a decent camera can take a picture of a crack in the sidewalk - and have the image met with blank stares and mutterings of "Yeah, it's a crack in the sidewalk., so what?" It takes a blind photographer to so effortlessly use a physical symbol - i.e., a photograph of some "thing" - to represent the deeper, inner experience of how "difficult it is to walk to class" on a campus built by people who can see. By not being able to see things, the blind photographer naturally focuses on using the things that the camera is able to capture to show what else things are. And that is what the very best photography has always been about.

While I have focused mainly on the philosophical end of the spectrum in this short commentary, I would be remiss in not mentioning that I was just as struck about how powerful a general learning tool - about self, about world, about learning (!) - the project was for the students involved. In some ways, though not quite as "obviously" dramatic - the results of the project remind me of Oliver Sacks' Awakenings (though here the "awakenings" are more spiritual than physical).


The blind obviously have much to teach us sighted photographers how to really see. They teach us to pay attention to all of the little "invisible cracks" in the world, and to not rely exclusively on our eyes in doing so. There is no better place to begin the first lesson on this journey of illumination - which takes the form of a gentle admonition to just "close your eyes" - than to savor the examples in this magnificent book, Seeing Beyond Sight. Highly recommended.

Postscript #1: There is recent evidence that suggests that "blindsight" - i.e., the ability "see" even if completely blind to visual stimuli - is real (and is due to previously unknown ancient evolutionary sensory pathways). See Blind Man Navigates Maze.

Postscript #2: A few days after posting my blog entry, I ran across another review of Seeing Beyond Sight very much in the spirit of mine; which is to say, philosophically infused and considerably more about "seeing" than seeing.