I am very pleased to announce that 24 of my photos (a mix of of landscapes, still lifes, and abstracts) will be on display 7 - 31 Dec, 2007 at Books & Books in Coral Gables, Florida. For those of you in the area with an interest in my work, please stop by for the opening of the exhibit on Friday, December 7, from 7 to 10 pm. Since Books & Books also has an in-house cafe, there will be ample - and free - (courtesy Dr. Rosa Abraira) munchies and drinks! :-) This wonderful local bookstore was founded by (current, and two-term, American Booksellers Association president) Mitchell Kaplan in 1982, and has since grown to become one of the best known and well-respected independent bookstores in the country. I am honored, and humbled, at having been given this rare opportunity to display a few of my works at this venue.

The photos will be grouped into two parts: (1) Natural Order, consisting of images that evoke a sense of spontaneously organized "orderliness" in an otherwise "random" natural environment...

and (2) Imposed Order, consisting of images of the natural environment upon which an implicit human presence has somehow knowingly, or unknowingly, imposed a nonrandom element. 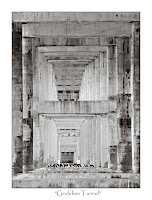 So please come, have some free food and drink and (hopefully) enjoy some photos! (I plan on being there for the opening, and will likely stroll in a few times on the weekend as well;-)
Posted by Andy Ilachinski 4 comments: 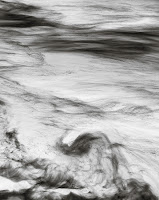 An alternative title for this blog entry could well be, On the art of transforming a visual vice into a virtue. The "visual vice" in this case (at least for this photographer ;-) being a bright, sunshiny day on the shores of the Potomac River at Great Falls park, Virginia. While there were plenty of areas of shade in which I could park my camera and tripod, and I could always use my light balancing disk to locally block out the strong sun to take closeups of plants or leaves, what I deliberately set out to capture one particular day a few weeks ago was the flow of water. Unfortunately, this is virtually impossible to do (at least in the manner I was envisioning) without cloud cover to provide ample diffused light. So, what to do?

Having hiked down some steep rocks to get close to the river, I was more or less committed to either taking some close-ups of rocks and crevices (which I did), or find a way to capture (and communicate) the flow of water without the diffused light I so craved. A mini epiphany saved the day, and planted a seed for future excursions.

My epiphany consisted of exploiting the fact that since the sun was so intense, it naturally left a strong visual trace of its cacophony of specular reflections. Ordinarily, such reflections show up as unwelcome burned out highlights. But what if I used them to accent the flow without bringing undue attention to themselves? Such as by showing / printing the digital equivalent of an analog negative? Blacks become whites, and burned-out whites become blacks; individual "points" tracing - in a vaguely pointillist fashion - the beautiful dynamic patterns of the flowing water. The images here are just a few samples of my (still ongoing) experiments with staccato flow abstraction.
Posted by Andy Ilachinski 3 comments:

"Far away in the heavenly abode of the great god Indra, there is a wonderful net which has been hung by some cunning artificer in such a manner that it stretches out infinitely in all directions. In accordance with the extravagant tastes of deities, the artificer has hung a single glittering jewel in each "eye" of the net, and since the net itself is infinite in dimension, the jewels are infinite in number."

"There hang the jewels, glittering like stars in the first magnitude, a wonderful sight to behold. If we now arbitrarily select one of these jewels for inspection and look closely at it, we will discover that in its polished surface there are reflected all the other jewels in the net, infinite in number."

"Not only that, but each of the jewels reflected in this one jewel is also reflecting all the other jewels, so that there is an infinite reflecting process occurring."

"Sudden Stillness" Book to be Published 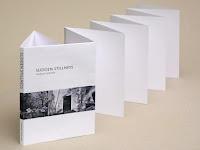 Though I can still hardly believe it, I have been told by the publisher (Eddie Ephraums, of Envisage Books) sponsoring the British Black & White Photography journal's "What's Your Book?" contest, that my book idea submission has won!

While there were several stages to the judging (see my earlier blog post), the last stage consisted of a two month long on-line vote (by readers of the journal) for one of three finalists selected by a panel of judges. Well, the voting site has closed, the votes have been counted, and my book idea seems to have bubbled ever so slightly to the top! In truth, as I had written before, I was thrilled beyond measure at just seeing my name on the shortlist of three finalists, with two other obviously gifted photographers. Trevor Crone and Michael Copsey both had superb entries, and beautiful photographs. I am also sure that both will also soon have their work published in a book, as the quality simply speaks for itself. It is a sincere honor to have shared a temporary spotlight with these fine artists.

My own entry consisted of six sample images (supplied on a CD), 20 additional images for a later stage of judging, along with some fine-art prints sent via mail, and the following title, strap-line and "short description" of what I envision a book of my photos looking like:

Simple, Zen-like meditations on the mystery of nature's primal patterns, expressed in four movements (each introduced by a short essay): Chaos, Order, Complexity, & Decay. "Chaos" is disorganized and formless; "Order" is imposed structure; "Complexity" is self-organized and emergent; “Decay” is entropic death, but presages rebirth. These interpenetrating primal patterns drift quietly on an ineffable meta-pattern of energy. Collectively, the four movements quietly weave a visual narrative to reveal nature experienced as sudden stillness.

The final pool of images from which Eddie Ephraums and I are currently sequencing a selection for the actual book, consists of about 90 photos (though only about a quarter of these will appear in the final version). Eddie's working design for the book is quite interesting. He plans on creating a concertina-style - i.e., fold-out - book, a mockup of which appears above. I am told that these kinds of books are notoriously difficult to produce, particularly when using heavier than normal paper stock, which Eddie wants to use because it allows the book to stand up by itself when open. Fully extended, the book will span almost two meters in length! Eddie is also trying to achieve the finest possible tonal reproductions, so that the relatively small number of pages (about 20) is more than made up for by the quality of the photographs.

As this will be a very limited initial run of about 200 copies (!), one thing I must be mindful of is the potential audience and general level of interest for the book before it is published. I therefore humbly ask those readers of my Blog who might be interested in purchasing a copy to please leave a comment, or email me privately. I will be more than happy to put you on my list, keep you up to date on the book's progress, and let you know (as soon as I do) of when it will be available for purchase.
Posted by Andy Ilachinski 6 comments: