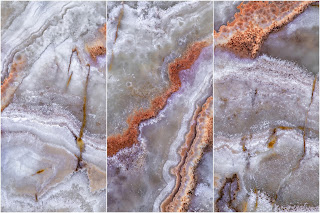 "If metaphor is a verbal
strategy to evoke images,
then as a photographer
I’m interested in
combining images
to alter associations by
extending the image itself
...
It is this act
of transformation,
interactivity between images,
that I find the most challenging."

- Nathan Lyons (1930 - 2016)
Postscript / Slightly-convoluted aside on the creative process. I'm still experimenting with what to do with a storehouse of marble abstracts (from c.2011) that I recently "re-discovered" on an old hard-drive during my almost year-long COVID-19-induced "creative convalescence." While the photographs work by themselves - just as straight images - I've started playing with other ways of displaying them. What got me started was the fact that the best abstracts consist of (or possess) multiple overlapping regions that are just as strong if displayed separately. This aesthetic dilemma is both trivial and deep. It is trivial, because it is really no different from the most basic aesthetic judgement that all exposures depend on; i.e., framing. But it is also deeper, because - tautologically - a completed image can only reveal what the intentional framing allows it to reveal. Ironically, the deepest aesthetic value of an image (whether it is intended by the artist or not) may lie hidden, in latent form, discoverable only by discerning the full inherent richness and complexity of the Gestalt of (the myriad entwined parts of) an image.
What do I mean by this, on a more practical level? I first toyed with deliberately breaking up a selection of my marble abstracts into triptychs, literally breaking the images up into equal thirds. I did this not because I thought the images "looked better" when dissected in this way, but because - for the cases I selected - each individual panel proved to be as strong an image - by itself - as the abstract as a whole. But the whole images proved too intrusive - they made it hard to "see the trees for the forest." I next played with making random triptychs, assembling them from a pool of individual 1/3-sized panels (i.e., a candidate triptych consists of a random panel from a random image X, a random panel from a random image Y, and a random panel from a random image Z, keeping only the ones I "liked”). That exercise proved mostly fruitless. While I found a few stray triptychs mildly interesting, most were - sadly but obviously - "less than the sum of their parts." Then I tinkered with constructing triptychs-of-triptychs, but that soon got unmanageable, and the results (except for a few notable exceptions) were less than stellar. (I also experimented with randomly assembling 3-by-3 blocks of parts of images, but the less said about that effort the better.)
And so, we get to the image you see posted on top, which is but one of a fairly large portfolio I've convinced myself I really like; but which also took me a while to understand why (of course, your taste may differ). First, in the context of the labyrinthine "creative process" I just described, the image represents a rather "simple" excursion from just displaying the whole image. Indeed, the "algorithm" (if that is what I dare call it) is to split an image into three parts as before, and choose the "best" (most pleasing?... most interesting?... in practice, whichever one "holds my gaze longest") among the three possible juxtapositions (i.e., 1st and 2nd panel interchanged, 3rd panel fixed; 1st and 3rd panel interchanged, 2nd one fixed; or 2nd and 3rd panel interchanged, and 1st panel fixed); that's it! What makes it work is that - unlike an image that is just broken up into thirds (wherein you "see" the whole even if any of the individual panels strikes an interest on their own) - the whole in this case is objectively invisible (or visible, but only in latent form) - but is nonetheless implicitly still within sight, "just barely out of reach." The viewer is thus afforded a meditative space in which to quietly view and absorb the individual panels, all the while being gently reminded that none of them is the complete story. Indeed, it comes tantalizingly close to letting one to see - in true Goethian fashion - both the whole and its parts simultaneously. Some of the better examples of this (such as the one at the top of this post) induce a dynamic unresolved tension (in me, at least) between seeing the "whole" and "seeing the parts" (along lines of the infamous Necker cube or Wittgenstein's Duck-Rabbit); and take a step toward enticing the viewer to appreciate an image as "more than the sum of its parts."
"Abstract formal elements are
put together like numbers and
letters to make concrete beings
or abstract things;
in the end a formal cosmos
is achieved so much like
the creation that a mere breath
suffices to transform
religion into art."
- Paul Klee (1879 - 1940)
Posted by Andy Ilachinski No comments: 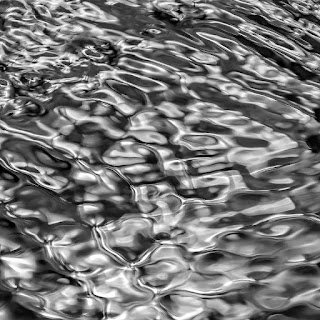 "We are easily deluded into assuming that the relationship between a foreign subject and the objects in his world exist on the same spatial and temporal plane as our own relations with the objects in our human world. This fallacy is fed by the belief in the existence of a single world, into which all living creatures are pigeonholed. This gives rise to the widespread conviction that there is only one space and one time for all living things. Only recently have physicists begun to doubt the existence of a universe with a space that is valid for all beings. That such a space cannot exist is evident from the fact that all men live in three distinct spaces, which interpenetrate and complement, but in part also contradict one another."
...
"The mechanists have pieced together the sensory and motor organs of animals, like so many parts of a machine, ignoring their real functions of perceiving and acting, and have even gone on to mechanize man himself. According to the behaviorists, man’s own sensations and will are mere appearance, to be considered, if at all, only as disturbing static. But we who still hold that our sense organs serve our perceptions, and our motor organs our actions, see in animals as well as not only the mechanical structure, but also the operator, who is built into their organs, as we are into our bodies. We no longer regard animals as mere machines, but as subjects whose essential activity consists of perceiving and acting.  We thus unlock the gates that lead to other realms, for all that a subject perceives becomes his perceptual world and all that he does, his effector world. Perceptual and effector worlds together form a closed unit, the Umwelt. These different worlds, which are as manifold as the animals themselves, present to all nature lovers new lands of such wealth and beauty that a walk through them is well worth while, even though they unfold not to the physical but only to the spiritual eye." 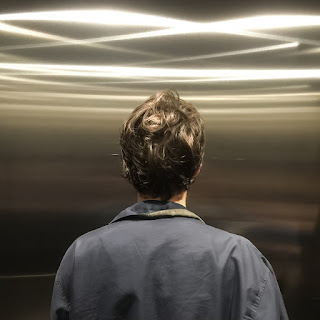 "Sometimes he seemed to be
saying that nothing existed
unless people thought it did,
and the world was really
only there at all because
people kept on imagining it.
But then he seemed to be
saying that there were
lots of worlds,
all nearly the same and
all sort of occupying
the same place
but all separated by the
thickness of a shadow,
so that everything that
ever could happen
would have somewhere
to happen in."
- Terry Pratchett (1948 - 2015)
Equal Rites
Posted by Andy Ilachinski No comments:

Email ThisBlogThis!Share to TwitterShare to FacebookShare to Pinterest
Labels: Energy

"The Cosmos is all
that is or was or ever will be.
Our feeblest contemplations
of the Cosmos stir us --
there is a tingling in the spine,
a catch in the voice,
a faint sensation,
as if a distant memory,
of falling from a height.
We know we are approaching
the greatest of mysteries." 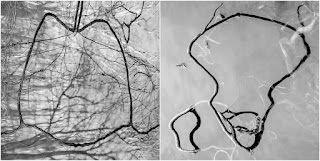 "Passion for science derives from an aesthetic sensibility, not a practical one. We discover something new about the world, and that lets us better appreciate its beauty. On the surface, the weak interactions are a mess: The force-carrying bosons have different masses and charges, and different interaction strengths for different particles. Then we dig deeper, and an elegant mechanism emerges: a broken symmetry, hidden from our view by a field pervading space. It’s like being able to read poetry in the original language, instead of being stuck with mediocre translations."

"Its substance was known to me. The crawling infinity of colours, the chaos of textures that went into each strand of that eternally complex tapestry…each one resonated under the step of the dancing mad god, vibrating and sending little echoes of bravery, or hunger, or architecture, or argument, or cabbage or murder or concrete across the aether. The weft of starlings’ motivations connected to the thick, sticky strand of a young thief’s laugh. The fibres stretched taut and glued themselves solidly to a third line, its silk made from the angles of seven flying buttresses to a cathedral roof. The plait disappeared into the enormity of possible spaces.
Every intention, interaction, motivation, every colour, every body, every action and reaction, every piece of physical reality and the thoughts that it engendered, every connection made, every nuanced moment of history and potentiality, every toothache and flagstone, every emotion and birth and banknote, every possible thing ever is woven into that limitless, sprawling web.
It is without beginning or end.
It is complex to a degree
that humbles the mind.
It is a work of such beauty
that my soul wept...
..I have danced with the spider.
I have cut a caper
with the dancing mad god." 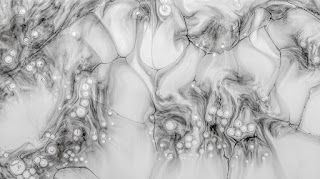 "How can a three-pound mass of jelly that you can hold in your palm imagine angels, contemplate the meaning of infinity, and even question its own place in the cosmos? Especially awe inspiring is the fact that any single brain, including yours, is made up of atoms that were forged in the hearts of countless, far-flung stars billions of years ago. These particles drifted for eons and light-years until gravity and change brought them together here, now. These atoms now form a conglomerate- your brain- that can not only ponder the very stars that gave it birth but can also think about its own ability to think and wonder about its own ability to wonder. With the arrival of humans, it has been said, the universe has suddenly become conscious of itself. This, truly, it the greatest mystery of all."