Reality vs. Illusion vs. Perception vs. Understanding 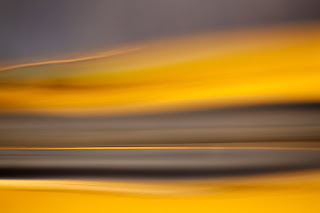 “The camera is not only an
extension of the eye but of the brain.
It can see sharper, farther,
nearer, slower, faster than the eye.
It can see by invisible light.
It can see in the past,
present, and future.
Instead of using the camera
only to reproduce objects,
I wanted to use it to make what is
invisible to the eye — visible.”
— Wynn Bullock (1902-1975)
Posted by Andy Ilachinski 3 comments:

Sting, Goethe, and the Creative Process

"Basic characteristics of an individual organism: to divide, to unite, to merge into the universal, to abide in the particular, to transform itself, to define itself, and as living things tend to appear under a thousand conditions, to arise and vanish, to solidify and melt, to freeze and flow, to expand and contract....What has been formed is immediately transformed again, and if we wish to arrive at a living perception of Nature, we must remain as mobile and flexible as the example she sets for us." - Johann Wolfgang von Goethe


My wife and I recently went to Sting's Symphonicities concert, when his tour stopped by in northern Virginia. Apart from enjoying his music (backed by the Royal Philharmonic Concert Orchestra), and observing the inevitable aging of his/our generation first hand - there were many, many more 40/50/60-somethings at the concert than anyone who can still remember pimples on their young faces (my wife recalled the puzzled look on the face of our 17 year old baby sitter when she told her where she and I were going for the evening; "Sting who?" she asked), the evening gave us a chance to muse on one of the reasons for Sting's longevity, and what it may say about the creative process in general.

There are some who have criticized Sting's recent forays into decidedly non-traditionally-Rock-like music oeuvres (such as with his If On a Winter's Night and Songs From a Labyrinth albums). And his most recent Symphonicities album has been described as same-ole / same-ole embellished with a full orchestra (an overly harsh assessment, IMHO, as much thought and craft obviously went into integrating new voices and new accompaniment). Of course, it is precisely by continually venturing into new musical territories and challenging himself to rework older material that Sting stays a potent musical and creative force. Sting also challenges us to consider just who "Sting" (or any artist) really is, and whether being content with "sameness" is a form of artistic decay, at best, or artistic irrelevance, at worst.

Ansel Adams, with his piano skills, was fond of comparing the relationship between prints and original exposures to performances of scripted musical scores; and was equally fond of "reworking" old plates with new techniques or aesthetic sensibilities. The "Ansel Adams" of 1980 was similar to but not entirely equivalent to the "Ansel Adams" of 1960 or the "Ansel Adams" of 1940. Yet we use the same "name" to refer to all three periods, and have a mental picture of the "same" Ansel Adams when referring to any of his impermanent historical versions. Szarkowski's Ansel Adams at 100 shows a few examples of Ansel's evolution as a printer (the difference between Ansel's original and 20+ year-later version of his well-known "Mckinley" print are particularly striking).

There is a deeper - philosophical / epistemological - problem lurking here, hidden in a seemingly innocuous question: "What is the difference between the 'name' of something that is alive - a flower, a pug, an artist, or an artwork - and the 'living being' itself?" Richard Feynman, the great physicist, told of an important lesson he was taught as a child. His father - a methodical observer of nature - delighted in sharing with his son his voluminous mental notes on the rich lives of all the birds that lived in their neighborhood; when they came out in the morning, what songs they sang, what food they ate, and so on. All of this his father learned on his own, not by reading books, but by carefully watching and listening to the birds for years and years. Young Richard's lifelong lesson came one day when his peers laughed at him for not knowing any of the birds' names, something he never learned from his father (who himself did not know). His father gently explained to Richard that he actually knew far more about the birds than any of his friends: "All your friends know is a jumble of sounds that help them point to a particular bird. Only you know who those birds really are!"

This holistic approach to "knowing" can be traced back to Goethe's way of doing science, an approach which Henri Bortoft (in his masterful work, The Wholeness of Nature: Goethe's Way Toward a Science of Conscious Participation in Nature) describes as "dwelling in the phenomenon" instead of "replacing it with a mathematical representation." It derives from the "simple" observation that living beings are growing, evolving processes that are as much "things in themselves" as interconnected components of lesser and greater processes. To identify any one state of such a being with the being itself - i.e., by using a "name" to designate "what the system is" at some arbitrary time during the course of its evolution (such as by taking a picture of a tree in your yard one day and calling it "the tree in my yard"; or by taking a picture of the Atlantic ocean from some beach on Long Island - see picture above - and calling it the "Atlantic Ocean") - is to miss completely what the being really is; namely, an organic instantiation of a continually unfolding dynamic process of evolution, metamorphosis, and transformation.

In describing the movement of metamorphosis in the foliage of a flowering plant, Friedemann Schwarzkopf (in his The Metamorphosis of the Given: Toward an Ecology of Consciousness), suggests that "...if one could imagine a person walking through the snow, and leaving the imprints of its feet, but with every step changing the shape of its feet, and if one would behold not the trace in the snow, perceptible to the sense-organs of the physiological eyes, but the living being that is undergoing change while it is walking, one would see with the inner eye the organ of the plant that is producing leaves."

And what of the lesson for the photographer? If only we could see the world as Schwarzkopf - and Goethe - suggest we see a plant! The inner creative process that drives what we do (why and what we choose to look at, what moves us, what grabs our attention and demands to be expressed) is just as much a living force as what we train our lenses on in the world at large. I would argue that in order to become better - more impassioned, more sincere, more artfully truthful - photographers, requires a more Goethian approach; it requires us to learn how to dwell in our subjects. Don't focus on objects or things. Pay attention instead to process; and revel in your own transformation as you do so.

Postscript. Goethe's The Metamorphosis of Plants has recently been reissued in a beautiful new edition. Highly recommended for anyone interested in learning about the "...how of an organism." For those of you wishing to pursue Goethe's approach to nature, I urge you to also look at two recent books: (1) Meditation As Contemplative Inquiry, by physicist Arthur Zajonc, and (2) New Eyes for Plants: A Workbook for Plant Observation & Drawing, by Margaret Colquhoun and Axel Ewald.
Posted by Andy Ilachinski 5 comments: 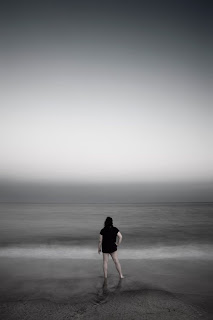 It has become a tradition of sorts for me to capture an "Homage to Friedrich" image of my wife - gazing out toward an ineffable infinity - at some point during a trip. Last year, several such opportunities arose during our trip to Scotland. This year there was but one, late one day, as the kids and I were preparing to leave the beach, and I found my wife utterly transfixed by the boundless Long Island waters. She remained motionless long enough for the ~30 sec exposure seen above to render her tack sharp among the surrounding mystery.
"Close your bodily eye, that you may see your picture first with the eye of the spirit. Then bring to light what you have seen in the darkness, that its effect may work back, from without to within."
- Caspar David Friedrich
Posted by Andy Ilachinski 4 comments: 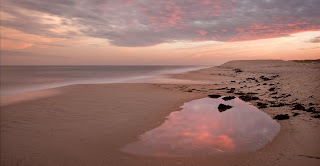 "We must learn to reawaken and keep ourselves awake, not by mechanical aid, but by an infinite expectation of the dawn."
- Henry David Thoreau (1817-1862)


I have experienced just such a (spiritual) reawakening during a 10 day sojourn with my family to my roots on Long Island, NY. The image above was among the first of a series of images captured during our first night in Riverhead, following a major storm that passed through the area. This is the view east along the ocean beach at Shinnecock County Park, in Southhampton, NY. As I process images from our trip, more are sure to appear on my blog. In the meantime, all I can say is, "Gosh, it was great to just walk around eastern Long Island with my camera!"
Posted by Andy Ilachinski 2 comments: