I am delighted to announce an upcoming slide presentation in Alexandria, VA, 6:00 to 8:00 pm on August 2 (Tuesday). The talk will be given at Alexandria's historic Morrison House (116 South Alfred Street, Alexandria, VA 22314) and is sponsored by the Torpedo Factory's Art Center.

From the press release:

Photography, Physics, and Complexity: Strange Bedfellows or a New Aesthetic?

Physics and photography have always been inextricably linked: by chemistry, light, diffraction, refraction, reflection, polarization, etc. But these are only the most obvious and superficial of connections. This talk uses complexity theory – which describes the fundamental relationships between parts and wholes – to point to a vastly deeper, resonant level on which physics and photography – any creative art – are linked, and offer a possible glimpse of a new fundamental aesthetic grammar. In the end, it is argued, the outwardly-directed journey toward objective realities, and the inner passage toward subjective truths are revealed as but two interrelated aspects of a single creative thread of self-discovery.

Born in 1960 on Long Island, NY, and the only son of an architect and artist, Andy's life has always straddled left– (analytical, logical) and right– (creative, artistic) brained worlds.

On the left-brained side, he earned a Ph.D. in theoretical physics (specializing in complex systems) in 1988 and has over 20 years experience as a research analyst and project director at the Center for Naval Analyses (CNA) – a federally funded research and development center headquartered in Alexandria, Virginia – where Andy has pioneered the application of complex adaptive systems theory to military operations research problems. He has authored two graduate-level mathematical physics texts on nonlinear dynamics and agent-based modeling, co-authored a book on artificial-life models and contributed to Springer-Verlag's 10-volume Encyclopedia of Complexity and Systems Science, and is on the editorial board of two physics journals.

On the right-brained side, and both by temperament and inner muse, Andy is a fine-art black-and-white photographer, and has been one for far longer than his Ph.D. gives him any right to claim an ownership by physics. He has delighted in taking pictures ever since his parents surprised him on his 10th birthday with a Polaroid camera. Andy has won numerous awards (in both print and on-line juried contests), has exhibited in many juried solo and group shows, appeared in Lenswork (a preeminent fine-art journal of black and white photography), Focus magazine, both U.S. and U.K. Black & White magazines, and won a photo-magazine sponsored book contest. He has received multiple awards at the prestigious Black and White Spider Awards, and was one of the founding juried members of Lorton Art's Photography Workshop (in Lorton, VA). In 2010, Andy's work was featured (alongside two other artists) in a four month exhibit at the American Center for Physics (in College Park, MD).

More About the Series

This series of monthly talks is sponsored by the Torpedo Factory Artists’ Association, the Alexandria Archaeological Commission, and the Morrison House Hotel. The talks take place on the first Tuesday of each month. Cocktails will be available for purchase through The Grille at Morrison House Hotel, and dinner reservations can be made for guests who would like to continue their experience following the event.

The Morrison House, a Kimpton Hotel, is an elegant boutique hotel located in the heart of Old Town, Alexandria. Named an outstanding hotel on Condé Nast Traveler’s 2008 Gold List, the hotel exhibits the romance of Europe and the charm of Early America through its decorative federalist-style reproductions. The architecture blends into the historic surrounding of Alexandria, while its warmly lit rooms, soft music, and outstanding cuisine define an experience that is graceful and effortless. The AAA Four Diamond property also features The Grille, an intimate restaurant that serves a menu of relaxed American fine dining. The hotel is located at 116 South Alfred Street, Alexandria, VA 22314, (703) 838-8000. 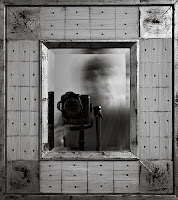 "The interpretation of our reality
through patterns not our own,
serves only to make us ever more unknown,
ever less free, ever more solitary."
— Gabriel Garcia Marquez
Author (1927 - )
Posted by Andy Ilachinski No comments:

Email ThisBlogThis!Share to TwitterShare to FacebookShare to Pinterest
Labels: Quotes

"Through falling from its previous function, and thus outliving the use originally conferred upon it, the ruin transgresses and subverts our everyday encounter with space and place. In the space of order and regulation, boundaries are delimited and linear. Being in place means knowing the limits of that place. So long as those limits are respected, then indeterminacy is evaded and the impression of space as productive can be maintained. At the same time, urban space undergoes domestication until it gathers a sense of how it ought to be. Rendering its structural properties apparently a priori, the space for malleability automatically assumes a deviant quality. If delimited space is productive, then space which broaches those boundaries will be termed wasted or otherwise expendable. In the ruin, the elements of waste and marginalization are crystallized...what was once built to testify to a singular and eternal present becomes the symbol and proof of its mutability."
- Dylan Trigg
The Aesthetics of Decay
Posted by Andy Ilachinski 2 comments:

"The tree is more
than first a seed,
then a stem,
then a living trunk,
and then dead timber.
The tree is a slow,
enduring force straining
to win the sky."
- Antoine de Saint-Exupéry
(1900 - 1944)
"The tree which moves
some to tears of joy
is in the eyes of others
only a green thing which
stands in their way."
- William Blake
(1757 - 1827)
Posted by Andy Ilachinski No comments:

Email ThisBlogThis!Share to TwitterShare to FacebookShare to Pinterest
Labels: Trees

"Abstraction is real,
probably more real than nature.
I prefer to see with closed eyes."
- Joseph Albers (1888 - 1976)
"Abstraction allows man to see
with his mind what he cannot
physically see with his eyes...
Abstract art enables the artist
to perceive beyond the tangible,
to extract the infinite out of the finite.
It is the emancipation of the mind.
It is an explosion into unknown areas."
- Arshile Gorky
(1904 - 1948)
Posted by Andy Ilachinski 1 comment: