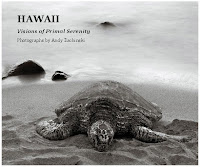 I've recently self-published a book of photographs of Hawaii, taken while my wife and I were celebrating our 10th wedding anniversary back in the summer of 2006.

Hawaii is an indelible part of me. More so even than my blood, my skin, or any of my physical possessions, for these are all far more transient and ultimately communicate far less about who I really am. But the depth and timelessness of my affection - my reverence - for these sublime, preternaturally beautiful islands, speaks volumes about the nature of my soul.

I visited the islands for the first time in the early 1980s as a beginning graduate student in physics. As soon as I stepped off the plane, and saw the gentle giant green mountains, the billowous clouds serenely floating over them, the deep inviting aquamarine blue water lapping the ragged shore - its dull roar echoing somewhere off in the distance - and tasted that intoxicatingly sweet scented tropical island air, I knew my soul had found its home. It is sublime, it is mysterious. There is an abundance of raw wild energy; and an immersive transcendent tranquility that subsumes all.

God, Yahweh, Buddha, Brahman, Tao, Ein-Sof, or whatever other linguistic "label" one is comfortable in using to refer to the infinite, attains a physically manifest luminous form in this paradisical oasis. Hawaii is magic.

At the end of the book, I've included a section of much older images, taken during my first series of visits to the islands between 1982 and 1988. The time I took to design the layout of the book, and to select the images for it, gave me an opportunity to compare my "eye" and aesthetics as they are now to what they were about 25 years ago; and to reflect on my own evolution as an artist (as well as to learn something about the creative process in general).

Something immediately struck me as I was viewing my large collection of "old" and "new" shots. The much older shots, which were all taken at a time when I was (possibly) a technically proficient photographer but had not yet matured as a "fine-art" photographer, were technically well executed "depictions of what I happened to be looking at" at the moment, in this case being Hawaii. While most are better than standard postcard fare (at least I hope so ;-), the truth is that, if I give an honest self appraisal of my earlier work, I see "scenes of Hawaii" and little more. Yes, they're pretty; yes, a few might (and do!) look nice on a wall. But they are pictures of Hawaii and little else. It is not false modesty for me to assert that any technically competent photographer, with a requisite skill level, could easily have reproduced (indeed, surpassed) many of my earlier photographs. So how are the new ones different; and in what way do I think they are "better"?

Well - jumping 25 years or so forward in time (and, in my case, about 75 thousand or so more images, give or take a few thousand, film and digital) - what I see myself doing more and more of (at least trying to) is incorporating the scenery "out there" into my bag of photo tools that I use to express what I feel "on the inside" when otherwise looking at the scenery. This represents both a subtle and profound shift.

The scenery, in an important sense, has become an integral part of my photographic toolkit, as important as - and distinct from - my usual assortment of purely technical tools (such as camera, lenses, filters, and so on). The scenery itself is no longer the core "object of focus" for my other tools. It has become an essential part of my toolkit.

It no longer really matters to me, in the deepest artistic sense, whether I am in Hawaii, or here in Northern VA, or Florida or anywhere else, in particular. My "goal" as a photographer is no longer to "show someone what I'm looking at." Rather, my goal is to communicate - express - a bit of "what I felt" when taking a picture to someone viewing the resulting photograph or print. I am much less concerned with whether the viewer "likes" what he or she "sees" - or identifies, objectively - in a photograph; and much more interested in conveying a feeling, a mood, a state-of-mind and/or heart, that persists even as viewer steps away from the image.

What is of lasting value (to both the viewer as an "involved interpreter and recipient" of an art work, and the photographer as its author) is not the fact that a particular photograph contains, say, a recognizable image of a "door," but rather the subjective emotional impression that the image of the door imparts to the viewer both while the viewer is actively viewing the photograph and afterwards, when the physical photograph is transformed (during the act of viewing) into a hybrid objective-subjective memory in the viewer's mind. It is my feeling that I am trying to convey; not the "object" that I took a photograph of to express that feeling.

What the viewer objectively "sees," of course, is the "object" (or objects) in the photograph; just as what I objectively "see" before I press the shutter is the (almost, but not quite identical) "object." Art, when it happens, depends on the simultaneous appearance of two transformative acts: (1) the photographer uses "objective reality" as an implicit tool to craft and communicate certain elements of his own - inner, subjective - reality; and (2) the viewer sees past the "objects" in a photograph and feels something - a residual imprint, perhaps - of what is, objectively speaking, not physically present, but hints at what the photographer felt while taking the photograph.

Of course, the degree to which the viewer "feels" what the photographer does (or what the photographer wishes to express) is impossible to measure. That is as it should be, for were this to be possible, art would be reduced to an "objective" science, which would be a pity. While I would certainly be delighted to know that someone resonates with one of my photos for exactly the same reason as I (or at least, in the same way I remember resonating with a "scene" while capturing it with my lens), it is not imperative that this is the case.

In truth, at this current juncture of my ongoing evolution, what I strive for in all my work is to convey the simplest feelings of calm. I understand that each viewer will take away from my images what he or she is predisposed to feel. Perhaps some find disharmony in what my eyes sees as serene patterns. But even in these cases, if viewers react more on an emotional level to my photos (even if the emotion they feel is different from the one I wish to convey) rather than in some detached, emotionally sterile or empty, fashion, I am still partly satisfied as an artist. For my goal is never the object, but a feeling.

So, getting back to the Hawaii book, why include my old pictures at all? Collectively, these early images define the first real "breeding ground" for my art. For it was in Hawaii that I first turned my camera onto something that I was truly impassioned about. Rather than taking the "same old" tired shots of "emotionally inert" subject matter (that may nonetheless have been a part of an otherwise valuable learning experience in a photography workshop, for example), I found myself taking shots in Hawaii for reasons that emerged quite naturally out of my own soul. In short, somewhere in the mists of time, lost among these old photos, is a magic Borgesian moment - well-defined but impossible to directly point to - during which I was born as a photographer.
Posted by Andy Ilachinski

I look forward to seeing this book. I find the development of your 'inner artisan' over time very interesting; to express thoughts and feelings through art makes much more of an impact - and what I've seen already makes me think you are a master. Knowing a bit of background makes the observer appreciate the art that much more.

A familiar word
flows across my computer
-the baby wakes up

Andrew, thanks for sharing great information about this book and I am looking forewords to buying this book.

Andrew, thank you sharing so much of yourself and your evolution as a photographer in this. It will be wonderful to see your book when it becomes available.