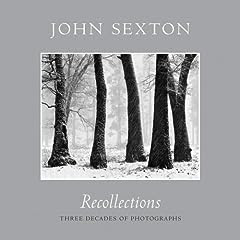 
Though I own hundreds of photography books, and regularly peruse most of them for years, I have had a relatively few "Wow!" reactions over the years - indeed, the last such experiences are at least two decades old (!): to Bruce Barnbaum's late 1970s' Visual Symphony and, in the middle 1980s, to Fay Godwin's Land - but Sexton's new Opus not only evoked an immediate heartfelt "Wow!" from me, it also raises the bar on what will trigger a similar exclamation from me in the future. I sat transfixed for hours after receiving it in the mail yesterday, and already consider it a sacrosanct member of the deepest core of my photography library. It is truly an extraordinary work of art; one that I will be savoring - and learning from - for years to come.

In short, a masterpiece!
Posted by Andy Ilachinski

Wow, great to see your wonderful photography blog, Andrew. I wouldn't have known about it had I not been on John Sexton's email list. I feel the same way you do about his latest book, as well as Bruce Barnbaum's Visual Symphony. I had the wonderful pleasure of attending workshops from both of them in the 80's and 90's, before old "arthy ritis" moved in, lol. I'm pretty much a side of the road photographer now, and have given up my view cameras for 35 mm digital SLR's, but still love feeling the juice. I loved your comment on photographing that which moves your soul. I always felt there was enough trauma and ugliness in the world without my photographing it - photography was always an outlet for seeing the beauty in the world.

Thanks for such an insightful blog,
Carol Cohen
http://www.geocities.com/fstopcarol1/
http://pg.photos.yahoo.com/ph/fstopcarol1/my_photos

I have just discovered your blog (per John Sexton's newsletter) and cannot express just how thrilled I am to have discovered a "kindred spirit" of sorts. Your commentary is insightful as well as inspriring. I know I will return regularly and anticipate new surpises. I have been photographing regularly since 1970, but have chosen this next year as the time to "break into the current" so to speak; I am in need of continued inspiration and guidance, as well as a sense of community as a fine art photographer and I think your blog may provide some of all that. Thank you.