What is it About Withered, Old Windows...? - Part II

What is it about withered, old windows? Even after posting a few recent images, my soul is still beckoned by the siren call of these enigmatic, lost souls of time. I have already written of the magical way in which withered windows simultaneously reveal and conceal mystery. Another reason I find them so strangely compelling, is that they are physical metaphors for the arbitrariness of partitions between parts and wholes.

As Gregory Bateson was fond of saying, "The division of the perceived universe into parts and wholes is convenient and may be necessary, but no necessity determines how it shall be done." Taking my cue from Bateson, and speaking for the moment as more of a physicist than photographer, I can assure you that one of the deepest (though seemingly trivial) questions one can ask of our universe is this: "How can I really be sure that THIS is different from THAT?" 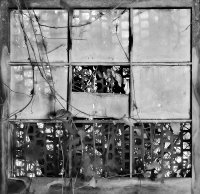 Almost as soon as we are able to see as infants, we begin to take for granted our ability to instantly, and effortlessly (at least from our conscious points of view!), partition the world around, and outside of, ourselves into parts and structures. As we open our eyes in the morning, we recognize the familiar walls and furniture of our bedroom, the sunlight streaming in though the blinds, the books on our shelves, the clothes in our closet, and so on. Hundreds of apparently separate objects instantly adorn our mind and space. But are they really separate? Where does one object begin and another end?

Where does the sunlight start and the window through which it seeps end? Where does the wall stop and ceiling or floor begin? Is the part of the room that is momentarily blanketed in darkness really different from the part that glows with the morning light? On an even deeper level, what is the real difference between the vast collection of cells that make up your body and the conscious you that is reading this sentence? 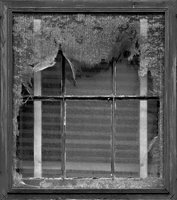 Is the universe really broken up into objectively separate parts, or is its clumpiness merely an illusion born of the fundamental limitations our senses impose on us?

Windows - for me - particularly old and withered ones, are reminders that much of the "order" we perceive "out there" is, in truth, only a local order that depends partly on what's out there, and partly on what's "in here" (in our minds and souls). The windows absorb and filter the myriad tones and forms of light that fall on them; allowing some to pass, reflecting others, rearranging most, and providing different views to different observers. Where is truth? Where is reality? Where is the observer?

"That which you are seeking is doing the seeking." - St. Francis of Assissi
Posted by Andy Ilachinski

I took a break and went to your blog...
after reading the "other" postings to your site
it struck me--if they could only see your work
as art and not as a photograph of a window then
maybe they could let go for a brief moment and
"breathe in" what I think the judges see in your
work when you win all those contests...

For me (and I guess this is b/c I know and talk
to you about your work)...I know that you photograph,
but that in and of itself is such a small part of the actual
"act" of creating your ART.

When I look at your work I no longer feel I am looking
at a window, rock, leaf, sticks, etc....
They have all managed (through your lense) to transcend
into an altogether new plane of conscienceness that
you alone understand...I do not need to know (or see) that
you have photographed a window, door, rock, leaf, etc...
B/C they are no longer those recognizible objects...they are so much more.

Wow, Andy, powerful photos and a powerful commentary to go along with them. Thanks for the insightful words. Hope you're having a nice holiday break!