One of my favorite authors is Jorge Luis Borges; though the "category" of creative endeavor to which Borges belongs - or, better, the creative endeavor that Borges defines - is infinitely richer than what is rather blandly suggested by "mere" author. For Borges is philosopher, mathematician, dreamer, mystic, seeker, visionary ... (the list goes on, perhaps endlessly). If there is one word that immediately comes to mind when Borges' name is mentioned, even before author or philosopher, that word is surely book; for Borges adored books. He adored writing them (or at least writing stories about books that would later appear in them), collecting them, thinking about them, even working with them (as when he was Director of the National Library of Argentina). Among Borges' well known tales and musings about books and libraries are the Library of Babel and Book of Sand.

"I pray to the unknown gods that some man -- even a single man, tens of centuries ago -- has perused and read this book. If the honor and wisdom and joy of such a reading are not to be my own, then let them be for others. Let heaven exist, though my own place may be in hell. Let me be tortured and battered and annihilated, but let there be one instant, one creature, wherein thy enormous Library may find its justification." - Jorge Luis Borges

Borges naturally came to mind recently, as I stumbled onto a lonely, deserted, out-of-the-way dilapidated two-room shack, full of withered old books, somewhere off Route 66 in northern VA. How perfectly Borgesian I thought to myself, as I gingerly stepped into a roomfull of dry, pebbled, half-decayed tomes, most strewn haphazardly over the sunken floorboards. Even more in tune with the "Borgesian" rhythms echoed by the physical forms of the books, was the kind of books that adorned this deserted little shanty. For these were not your run-of-the-mill thrillers and boddice rippers. Rather, almost all were on subjects distinctly Borges-like, and ranged from Dostoyevsky, to Kafka, to Immanuel Kant and Georg Hegel, to Carlos Castaneda, to Fritjof Capra, to Stanislaw Grof, to David Bohm, to a study of Dreams, to the latest (c.1980) research on consciousness.

"A book is more than a verbal structure or series of verbal structures; it is the dialogue it establishes with its reader and the intonation it imposes upon his voice and the changing and durable images it leaves in his memory. A book is not an isolated being: it is a relationship, an axis of innumerable relationships." - Jorge Luis Borges 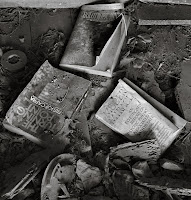 All arguably and quintessentially Borgesian subjects and authors, except for - ironically - Borges himself. Try as I might, I could not find a single volume of Borges' stories anywhere on these shelves. It is impossible to imagine the former owner/occupant of this decaying Borgesian labyrinth of books, which still palpably pulsates with ideas and visions that only a lover of Borges can appreciate and understand, not having the collected works of Borges standing somewhere on the shelves. But then, there is also the basic mystery of what happened to the owner. Why are his/her (remaining?) books still here, neglected and/or forgotten after all these years, quietly turning to so much dust? Did the owner seize his one prized volume of Borges' stories - which had to exist! - before being forced to quickly abandon this tiny shack for some mysterious reason? Why did the owner (or someone else?) return - looking at the empty carton apparently being readied for storing books - only to vanish once again? Or is the carton empty only because new books were brought in to replace those that had fallen (or stolen)? In either case, why? How long have these books been rotting here? Why are some shelves completely empty, while others are still full? Why does each of the five books lying flat on the floor with exposed pages contain the word "secret"?

"The composition of vast books is a laborious and impoverishing extravagance. To go on for five hundred pages developing an idea whose perfect oral exposition is possible in a few minutes! A better course of procedure is to pretend that these books already exist, and then to offer a resume, a commentary . . . More reasonable, more inept, more indolent, I have preferred to write notes upon imaginary books." - Jorge Luis Borges

I was entranced by the siren call of the ghostly volumes beckoning from the shelves, and silently reaching out from broken drawers. Are they all clues to some unfathomable puzzle? Is their "orderless" arrangement perhaps a clever illusion, and not entirely random? Are they a subtle palimpsest of eternal truths and wisdom, fiendishly encoded by some long dead genius that history has failed to record (or intentionally wiped from memory)? Did I unknowingly break some sacred code when I accidentally kicked a small rock off a page of an old Bible, thus relegating its cosmic message unintelligible to the one destined to decode it? Or did I just as unknowingly, and merely by entering, encode my own presence onto this living labyrinth, ineffably committing the one cosmically meaningful act my birth was prophesied to yield in this incarnation? Or is the reason why all these volumes are here, in this particular place and time, in this particular arrangement, itself but an infinitesimally small piece of a larger, even deeper, puzzle? A puzzle to be only discovered - but never solved! - by someone whose birth the puzzle master himself had not foreseen? Or has the destined solver unexpectedly, and prematurely, passed through this as-yet unripened riddle; unwittingly rendering forever unsolvable the very puzzle he - and he alone - was born to solve? Is the puzzle-master, perhaps, the solver? 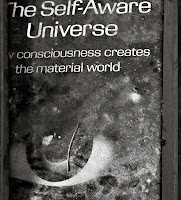 Such was the gravity of my thoughts and emotions as I solemnly packed up my humble gear and bade farewell to this Borgesian labyrinth of mystery. A single eye, staring upwards from the cover of a dusty book (whose spine had inexplicably entwined the rubber on the heal of my shoe), seemed to follow me before the light finally grew too dim for it to see. I imagine it shifted its gaze back inward toward itself, to continue meditating on the unimaginable fate that awaits these relics, trying to remember its own long forgotten role in creating them.
Posted by Andy Ilachinski

A very nice post. Plus, I'm glad to see someone mention the "Book of Sand", one of my favorite stories by Borges.

I love the photos; there is so much mystery in this dilapidated lost place and photos of old books; how is it possible that somebody left it all and just walked away. Is it possible that somebody just disappeared from this plane and left a message for you, the one who has eyes to see ?
You can rest assured that regardless who say what in your everyday life - You have another and more meaningfull goal - to look, to see, to share....

What a great find, it must have been fun rummaging around and photographing, nice images too !

your walking in the woods -- or whatever it was that brought that dilapidated shack to you -- a metaphor of observation: at root, don't your boots do most of the heavy lifting of your photography? (the fine control being in your hands and head, of course.)

re: the Borges omission, consider the possibility that another observer beat you to the shack, and instead of just observing made straight away with the Borges!

They say it's a cold world said...

This is a great post, about coincidence and memory, and, implicitly, about the meaning of objects. I could feel the looming, invisible, presence of Borges in the shack with you. I stumbled on your post looking for a citation from him. Somewhere, unless I'm mistaken, he describes the process by which a photograph erases the memory of the moment it was meant to preserve. Each time we look at a photograph, I remember reading somewhere, and I'm sure it was in his work, we remember, or come to remember, only the last time we looked at the photograph. Our memory of the actual thing depicted is diminished. Something along those lines, anyway, and I'm trying to locate where it comes from. It doesn't seem to be popping up on Google for me. If you recognize this and know the source, please leave me a note here or on my blog. Cheers.

I'm reminded of the MYST stories/puzzle-games. I was hearing the eerie MYST soundtrack while reading this... Thanks!

I loved the first photo - the battered book on the floor. Only nature that produces much beauty can produce such brutality.. but again is there any real difference between both? Any chance you went back to see the fate of the labyrinth and maybe solve some of the mystery?