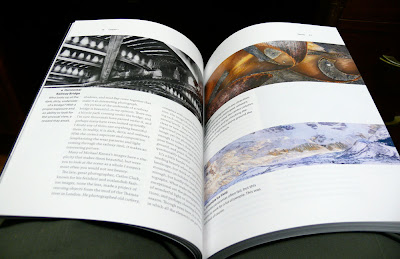 George Barr's stunning new book - Take Your Photography to the Next Level - is an impressive debut for George in the world of art instruction in book form, and a "must-read" book for photographers at all skill levels. George is already quite an accomplished master of photography in traditional print and Blog forms. Indeed, according to his Blog, the idea for this book, and a bit of its substance (though markedly enhanced and expanded) came about partly from the many insightful entries he's posted on his Blog over the years.

Apart from his obvious writing skill, one of George's great strengths as an artist/communicator is his ability to articulate some of the core - and often mysterious - qualities that describe the process of art in general; and photography in particular. Though he doesn't shy away from philosophical issues (and addresses such questions as "What is a fine-art photograph?" head-on), he has a veritable wellspring of practical advice to impart photographers, ranging from complete novices to seasoned professionals.

That this book is special is immediately obvious. It is neither an all too common "How To.." instruction manual on what f-stop to choose or what lens to put on your camera, nor is it yet another "This is how it is done in Photoshop..." guidebook (though some allusions to both sets of "problems" are sprinkled throughout). What this book does, and does exceedingly well, is address the much more difficult subjective components of fine-art photography: the nature of creativity in the photographic process, where to "look for" images, and what to do when you find them (and when you cannot!), how to compose your shots and why, how to assess your imagery, and to learn to develop your own "style," and the differences between purely technical acumen and aesthetic vision.

Such matters are rarely if ever are given the attention they deserve, and if they do appear in other books - typically as short side-bars or quick asides - do so more as after-thoughts than substantive discussions. In fact, I know of only perhaps three or four other books (none of which are as well-written as this one, by the way) that similarly delve deeply into the creative and aesthetic parts of photography. It is thus a book that is long-overdue; and I am delighted that a photographer of George's unique blend of artistic skill and expository ability has taken up the challenge.

I am also impressed by the utmost care and attention that has been put into the design and content of the book. The image selection is excellent throughout; and (in another rarity for books in this admittedly small genre) include many "don't quite work" photographs simply because George wants to show what works, what does not, and why. Even the captions to the photos show a consistent deliberate attention. Each tells a succinct story about what is being shown, and makes a point all its own that compliments the accompanying text. If all one did was to skim the book reading its captions, and nothing else, one would arguably still learn a great deal of the subject. Another nice feature is that many of the sections include simple but marvelously effective sketches to illustrate the finer points of, say, cropping and composition. While most authors would have contented themselves to include an image example or two and leave it at that, George goes that extra step for the reader. Finally, there is also a generous selection of "portfolio" images, each accompanied by its own "story" of how it came to be, in two-page spreads that appear throughout the book. My personal favorite (and one that, as George reveals, turns out to be among George's all-time popular images) is Windowpane, that appears on page 193. Indeed, it is this particular image, that I first saw in Focus magazine a few years ago, that introduced me to George's photography, and compelled me to become an avid reader of his Blog.

If you are either a budding photographer who wants to learn about the "art" in fine-art photography, or a long-practicing photographer (perhaps even a pro), and are wondering where to look for advice to improve your own vision; or your skill level is anywhere in-between, know that there is no better place to learn, and no better guide to turn to for guidance, than George's superb new book. On the basis of this book alone, I'd say George is about to embark on yet another career track (in addition to already being a physician and photographer); namely that of well-known, accomplished teacher of fine-art photography. Well done George.
Posted by Andy Ilachinski