"1 The world is all that is the case; 1.1 The world is the totality of facts, not of things; 1.11 The world is determined by the facts, and by their being all the facts; 1.12 For the totality of facts determines what is the case, and also whatever is not the case; 1.13 The facts in logical space are the world." - Ludwig Wittgenstein (Tractatus Logico - Philosophicus)
Wittgenstein devoted his life to understanding "language games," as logico-cognitive attempts to make sense of the world. There is no essential type of language for Wittgenstein; language consists of multiple games in which meaning (of words and sentences) depends more on their relationship to other language games than on a one-to-one correspondence of the words and sentences of any one language to reality.

"What can be said at all can be said clearly, and what we cannot talk about we must pass over in silence...It will therefore only be in language that the limit can be drawn, and what lies on the other side of the limit will simply be nonsense." - Ludwig Wittgenstein (Preface to Tractatus)

Language can only describe facts about the world, not the physico-logical structure the underlies those facts, or that defines the world out there. Indeed, the world - as itself - cannot be described at all; it can only be pointed to, or shown implicitly and indirectly, and always in relation to other self-consistent "pointers." "Feeling the world as a limited whole -- it is this that is mystical" - - Ludwig Wittgenstein (Preface to Tractatus, 6.45)

Mysticism, for Wittgenstein, is a kind of knowing that transcends prepositional logic and knowledge; a sense that despite the "fact" that the limits of the world cannot be articulated in any language, those limits nonetheless exist and can be known. Science and all conventional forms of language, however, must by their nature remain silent on the deepest truths about the universe. At best, they are signposts towards the sublime. 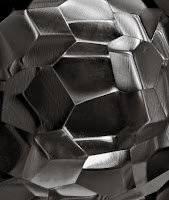 The word "sublime" means, literally, "up to the threhold" (sub = "up to" and limen = "threshold"). "Sublime" therefore means "up to the boundary, but no farther"; referring, in Wittgenstein's world, to taking meaning right up to the limit of what can - and cannot - be thought, and language to the interface between the representable and nonrepresentable. (A fascinating book, by the way, on precisely this notion of "representability of the sublime" has recently been written by James Elkins: Six Stories from the End of Representation: Images in Painting, Photography, Astronomy, Microscopy, Particle Physics, and Quantum Mechanics, 1980-2000; highly recommended).

And from these thoughts - these pointers to the sublime - it seems to me, emerges a deep yearning for photography and art...for what is art if not an attempt to communicate meaning beyond what is possible using conventional language? The precise meaning may not be conveyed (indeed, it is unlikely the artist fully comprehends that which he or she is trying to communicate), but the meaning of art lies in this attempt to communicate something beyond the categories imposed on the world by words and sentences alone.

In the end, of course, I always fall back on the sage words of Ansel Adams: "When words become unclear, I shall focus with photographs. When images become inadequate, I shall be content with silence."
Posted by Andy Ilachinski

I would be a little more carefull in using Wittgenstein form the "tractatus".

"Wittgenstein devoted his life to understanding "language games," as logico-cognitive attempts to make sense of the world......."

applies to the second phase, far after the tractatus, and godel's famous theorem, and sometime is even in contradiction with the former.

Second i find the association with adams
poetic (in the sense that poets bring together unrelated things to make poetry) but totally inapplicable, if any Adams could be a realist in philosophy which puts him at a stellar distance from Wittgenstein (either the first or the second). For realist i mean that he seems convinced that beauty is a property of the objects and not of the artifacts he made.

But, and it is a great but, i realize that it would take a long a path to discuss this thing and maybe we wont go anywhere :-)

Welcome and check out my photoblog.. hope we can give eachother advice.. danny

Beautiful your photos! I use to make my ones, but with another phocus. Take a look.

amzing, your blog is very good. it's give me much knowledge about photography... thanks