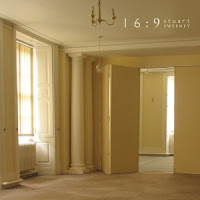 About a year ago I received an email from Stuart Sweeney, who introduced himself as a U.K. based (and Scottish born) musician. He said that after years of working behind-the-scenes for other musicians, he was in the process of releasing a debut album of his own music and that he was looking for images to feature on the CD and album case. He asked if he could use one of the images in my Spirit & Light portfolio that both he and his wife were both strongly drawn to. After a few exchanges via email (during which an "over the pond" friendship soon emerged), and my listening to samples of (what were at the time, unmastered) tracks from the album, I quickly gave my permission.

After hearing Stuart's music, I can say unreservedly say that I am honored to be featured on this enormously talented musician's debut album, which is now available for purchase (in both physical and digital form: click here for the official order page from Stuart's label Oomff, based in Corby, Northants, UK; an mp3 version is also available directly from Amazon, which contains links to samples).

While it is always difficult to attach meaningful words to music (particularly when relying on "conventional" labels and descriptions) - one must always listen and judge for oneself; click here for sample tracks - Stuart's style is best described as ambient music, with a mix of classical, jazz, and new age (electronic / synthetic). On a more gestalt level, Stuart - as an artist - may be described as an impassioned painter of richly textured sonic landscapes.

To my ear (an untrained musician, though I used to play the piano, even before I ever touched a camera), Stuart's aural excursions touch on territories visited by Brian Eno, some early work by Klaus Schulze, and (if an analogy can be drawn between Stuart's electronic creations and the tones of the human voice) Arvo Part. But all of these are but acoustic cousins, which are useful for context but do not do service to Stuart's own creations; for Stuart has carved out a unique - and uniquely beguiling - blend of ambient textures. Each short, self-contained piece transports the listener to other worlds and ethereal dimensions. The soulful interplay between quietly developing melodic strands and rhythms, generates a moodily meditative and contemplative atmosphere. As each piece gently takes hold of your imagination, you are compelled to co-create fantastic acoustic landscapes in your mind's eye as waves of music unfold - and enfold - around you.

If I seem to speak of Stuart's music in almost reverentially spiritual terms, it is because that is the effect it has on me. For Stuart has created some of the most beautifully ethereal - and intellectually mesmerizing! - music I have heard in a long, long time. For anyone who likes to listen to ambient music, I urge you to download some samples and listen to this extraordinary new artist for yourself. Congratulations to an amazing start of what I am sure will be a stellar public musical career! And thank you Stuart for featuring one of my photos on the inside of the case, and the CD itself!

Email ThisBlogThis!Share to TwitterShare to FacebookShare to Pinterest
Labels: Music

Love your blog...Thanks for sharing!!