Joyful Meditations in a Subterranean Cosmos 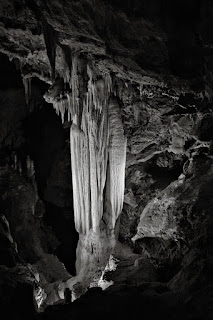 "Meditation reveals that
the obvious place to begin
is not in some other place,
it's right here."
- Angel Kyodo Williams
Being Black: Zen and the Art of
Living with Fearlessness and Grace

People often ask me (when I am out photographing), "You must spend a lot of time doing that, eh?" To which the answer is (and this is not a cop out), yes and no. Yes - obviously - because it is a life's passion of mine, and I "think about photography" most of my waking hours, even when pouring over equations and computer code in my day job (as a quick parenthetical aside, even as seemingly a mundane and unartistic an endeavor as putting together powerpoint slides for a technical presentation involves all kinds of compositional and graphical design elements, essentially indistinguishable from the unconscious processing going on behind the scenes of a photographer's craft). No - equally as obviously, but only after a moment's worth of thought - because, in truth, I do precious little active photographing while ostensibly engaged in photography!

Allow me to explain, and set the stage for the picture you see above and what all of this has to do with meditation. As a practical matter, the time I have to devote to real photography (i.e., not quick "point and shoot" grabs, but when I am out and about on a photo safari, mindfully settling into an area, senses tuned to visual possibilities ...) is short and comes in bursts. A few hours here and there on every other weekend perhaps; certainly more when my wife and I are on vacation, or when the family is visiting relatives in different states (hence my archive of portfolios generated in Florida's beauty, which is where my in-laws live). But even then, such as when we visited Greece and Scotland, my "real photo time" was diffused among an endless (but oh so welcome!) parade of 10-15 minute long patches of time during which we parked our car somewhere beside the highway or landmark and "explored for a bit." Then it is back in the car, and the reality of an equally endless parade of pictures that might have been captured - a common lament of all photographers - until the next roadside vista. While there are exceptions to any rule, it is generally rare to have more than a handful of minutes to do photography.

Thus the context for this post, which is intended as a short meditation on the joyful day-long photo safari I was privileged to have on an otherwise nondescript mid-week day last week. Going back a few months, I finally gathered the nerve (after pondering the issue for over a year before; I am a slow ponderer ;-) to leave a comment on the website for Luray Caverns, a popular tourist attraction in northern Virginia. I would have preferred a personal email, but I couldn't find an address on their website, so settled for sending a brief note in a "comment" post. In it, I introduced myself as a "professional fine-art photographer" (after wrestling a bit over whether I can really call myself one, since photography is far - far - from paying any meaningful fraction of my bills; I rationalized that at least the "fine-art" part was correct, since what I do as a photographer is emphatically not defined by anyone's demands but my own), and inquired about the possibility of having a "few hours to myself" inside the caverns with my camera and tripod. I heard back within a week from Luray's publicist, who could not have been nicer or more generous. Provided I choose a day other than a weekend, and one that falls before the April crowd rushes in, Luray would be happy to provide a full-days worth of unencumbered photography! A piece of heaven, I thought; and I was right.

I was greeted early in the morning by a staff member (who herself could not have been nicer or more accommodating; offering just the right mix of "Can I get you anything?" with a sincere "I'll leave you to your work" - it was not work, of course, but I guess carrying around two tripods, a bag with two DSLRs, four lenses, a speedlight, a portable drive for backup, a notebook, and an iPad, looked like it was work;-), led into the caverns, asked to wait a bit until all the lights were turned on (which took but a few moments), and then - music to a photographer's ears - told that "the caverns are all yours!" I essentially had the run of the place all to myself from 9:00am to about 5:40pm or so, armed only with a small bottle of water and a package of trail mix from Starbucks). There was a steady but quickly disappearing stream of visitors every hour or so; but they mostly hung around for a few minutes before moving on and out of eye and earshot. All told, I had over 8-1/2 hours of essentially uninterrupted "quality photography time" in the caverns; easily the longest such stretch I've had in over a decade. In a word, and I'm choosing the word carefully, Wow!

At the end of the day I was utterly exhausted (more so physically than psychically, as the strain of crouching and bending my 50 year old body in odd positions for "just the right" angle eventually took it's toll on every joint and muscle whose toll could be taken), but felt exhilarated; my inner state can best be described as a profoundly deep joyous inner calm. The kind of feeling one gets when one has accomplished exactly what one has set out to do; not to produce something, per se (the quality of which I am as yet unsure, as I have yet to start on the mountain - well, all 800+ images of a mountain - of post-processing work that awaits me in photoshop), but to simply engage in the creative process. And engaged I was. I will not soon forget these joyful day-long meditations on the visual delights I found in the subterranean cosmos known as Luray Caverns!
Posted by Andy Ilachinski

The joys of taking time to do what one loves!

It is exactly that all of us labor at jobs we dislike (or don't like all that much), tolerate commutes only the devil would enjoy, and generally slug through our day only to do it all over the next day.

It's wonderful that you took time to seek beauty at Luray Caverns. You should do something like this a few times a year. Go to new places, seek new beauty.

Perhaps now is the time to plan your next venture, your next outing. Mark your calendar, my friend, and mark it today. If you have to change the date, so be it, but with the date marked it's much easier to find a different date than to find a brand new date.

You will have something to look forward to, something to think about as you slosh through the days doing what pays your bills but neglects your soul.

Good luck to you!