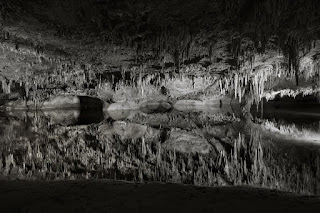 “Three Rules of Work:
Out of clutter find simplicity;
From discord find harmony;
In the middle of difficulty
lies opportunity.”
- Albert Einstein

As a follow-on to my previous entry on my recent day-long photo excursion to Luray Caverns in northern Virginia, I'd like to make a few remarks about the aesthetics of capturing the caverns in a photograph, and - ultimately - a fine-art print. The short version is that it is not easy!

There are several reasons for this: (1) light (as in "lack of control over"), (2) contrast (as in "there is too much of it"), and (3) innate dissonance (between everything and everything else that consists of light and form;-). As these are all interrelated, I'll discuss them as a group. Light, arguably the single most important component of any photographer's repertoire of "tools," is in this case unnatural (as it is due solely to the intensely locally bright orange tungsten lights), imposed (since it is installed and fixed in place by the park engineers), and fixed (because it is either on or off, never in any "in between" state or alternate projection angle). Thus, the photographer must deal with the lighting conditions as they are defined in situ; in particular, this means that there is no opportunity to "wait for the right light." One might argue, of course, that this is a general quandary all photographers find themselves in; we always "look for" shots, no matter the environment. But what renders this a particularly difficult compositional problem in a cavern is the second reason I've cited for why this task is difficult, namely contrast.

Luray Caverns' lights are bright; very bright; sometimes blindingly bright! And are often focused on relatively small patches of stalactites (dripstone formations that hang from the ceiling) and/or stalagmites (that build from the floor upwards). Again, while contrast is generally a good thing (certainly for black and white photography) and thus not necessarily a problem ("Well Andy, just find the blindingly brightly lit patches you happen to like!"), it can be a problem - certainly an aesthetic one - if what one is ultimately after is not finding the "best" composition that minimizes the impact of brightly lit patches, but one that best respects the totality of forms - including but not restricted to those both defined and hidden by lights and shadows. While visiting Santorini, Greece in 2008 with my wife, I also had to deal with strong contrasts, but at least there the contrasts were predictably variable. Since their strength and location changed throughout the day, I effectively had a degree of control over them; for example, I could decide when and where to set up my tripod (or just wait for the best conditions to arise). In Luray - and, I suspect, all other "public" caverns - there is simply too much fixed contrast to make this possible.

It was extremely difficult to find pleasing compositions of any forms larger than human-sized chunks simply because of the dizzying array of competing light sources. In those instances where I was able to find a pleasing composition of larger and more widely spaced elements (such as in the example that appears at the top of this blog entry, which is a panorama than spans about 100 ft from left to right), my post-processing in photoshop involved many more layers of local dodging and burning than is my norm. Mind you, this is not a complaint; it is merely an observation of one aspect of what makes photographing caverns difficult; difficult compositionally, and - even more so - tonally.

The last "problem" (both defined and exacerbated by the first two) is the caverns' innate dissonance. Nothing in the cavern is smooth, or smoothly varying. Not the light, not the forms, and not the textures. Indeed, the "forms" - such as they are - are best described as large to massive needles made of rock, arranged in staccato fashion throughout "rooms" that themselves range in size from smaller-than-cramped office cubicles to mini cathedrals. Far from a harmonious whole, the caverns are - at least at first sight - a visually loud cacophony of not-always-obviously correlated patterns. Everything is in contrast to - and in dissonance with - everything else in these caverns! There are certainly none of the smooth gradations of light and contour that one finds in the slot canyons of the southwest ;-) Yet, somehow, the photographer must craft a holistic harmony out of these ostensibly discordant compositional components.

So what to do? I chose (by deliberately going to the caverns) and now continue to choose (by spending even more time post-processing what I "saw" there) this experience as an opportunity to find ways of aesthetically balancing discordant parts. As Alan Watts reminds us, "...what is discord at one level of your being is harmony at another level." Yes, the forms are dissonant; yes, the lights are blindingly bright and often ill-positioned; yes, the tonal gradations all tend to yell and scream rather than sing in melodic verses; but my physics background (if not an even deeper intuition) insists that what appears, on the surface, as a confused tangle of a mess, is - at its heart - a wondrous harmony. Stay tuned...
Posted by Andy Ilachinski

Great blog, Andy. I'll follow along. Looking forward to reading through some of the older posts as well as the new ones!

What is physics? And, more to the point, how does mathematics relate to physics?

I posit, for your review and consideration, the following:

Physics is the study and understanding of nature as we find it. To "do" physics, one cannot create his own nature. Rather, he must work with what there is. The physicist is forever tied to that which is in front of him. An astronomer, for example, cannot make the heavens as he would like. He must deal with the heavens as they are. The galaxies are not positioned to one's liking; one must enjoy the galaxies, study them, just where and how they are.

But, mathematics works with physics so that a physicist has a language and vocabulary necessary to describe the universe. It is this joining that gives one a way to exploit them both to make more than each offers on its own.

I posit that what you must do at Luray Caverns is similar to what a physicist must do with nature. Both must study and understand the environment as it is. You cannot move the galaxies---you cannot bring the sun inside the caverns. What you have, what you find, what is there, is all there is. You deal with each (nature or photography) as you find the environment.

Your tools as a physicist are mathematics. Your tools as a photographer are your camera, you imagination, and your insight. These are very similar, eerily so. A mathematician must see relationships in his world that often obscured by his own bias. You have to create art in a new world and not allow your bias to obscure the beauty before you.

So, while you lament the caverns for what they do not have, what you say are limitations, the reality is that this is but another nature, another universe if you will, for which your tools stand ready to help.

May your explorations yield a bounty beyond your expectations.

One a similar note, we should explore the use of your computer, the world wide web, Photo Shop, and Wolfram Alpha, as they enable us to deal with other universes of study. But that's for another time.