Nice Shots, But Where's the Color? 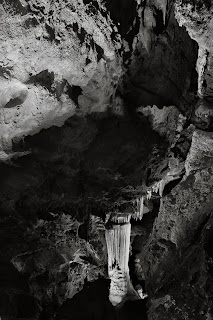 "The prejudice many photographers have against colour photography comes from not thinking of colour as form. You can say things with colour that can’t be said in black and white… Those who say that colour will eventually replace black and white are talking nonsense. The two do not compete with each other. They are different means to different ends." - Edward Weston

My mom has a habit of asking disarmingly "simple" questions (which usually have "simple" answers, but only after some thought has gone into addressing them). A while back, she asked me why I tend to take series of pictures rather than individual photos (that post led me to ponder the steps that all artists pass through on the way to "self-discovery"). Well, fresh on the heels of my one-day photo-safari at Luray Caverns, and after showing my mom a few early drafts of processed images, my mom came back with: "They're nice, Andy, but where is the color?"

This time, though, since the general question of color vs. black and white has been on my mind as I was preparing slides for a presentation, I was at least ready with a semblance of a real answer; and it goes to the heart of the basic difference between the forms of photography. Interestingly, the seed of the answer I gave my mom (and am now summarizing) was in my mom's own follow-up to the first part of her question. When I told her the "color" of the caverns was effectively a quasi-mono-tonal "orange," she quickly added, "But Andy, you had some beautiful orange abstracts recently, and they were all in color!" She was referring to my recent series of synesthetic landscapes, which are indeed all in color; this one for example: 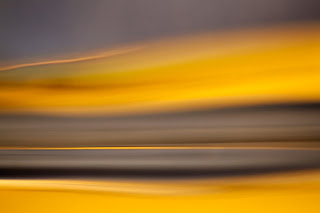 So why is this in color and the caverns in black and white? The "simple" answer is that it has everything to do with intent. The whole point of the synesthetic landscape series is to communicate a certain aesthetic of color. These abstracts are not about any "thing"; rather, they are all about the tonal distributions of the colors that they depict. While one is always free to convert to black and white... here is an example of one conversion of the above color shot: 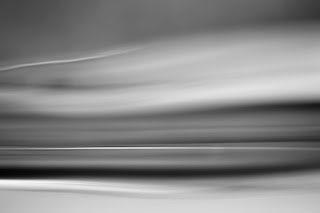 ...doing so destroys the very essence of what I took the shot to convey; namely color! This is not to suggest that some viewers (including my mom, though in this case, regarding my colorful "synesthetic landscapes," I know she agrees with me) might not find the black and white version preferable - aesthetics, as we all know, is not an objective measure - just that the color version of this particular image (and others in the same series) is the best exemplar of what my intent was in crafting the photo.

Now, what about the black and white picture of Pluto's Chasm shown above (another view appears in my first post about Luray)? First, in truth, it is not a black and white photo, as I add a subtle warm duotone to all of my photos (which you can see for yourself by loading the image in any image viewer and slowly cranking up the saturation). For the record, my mom didn't "buy" my "it's not really a black and white photo" answer ;-) So, let's take a peek at what the same image might look like in color: 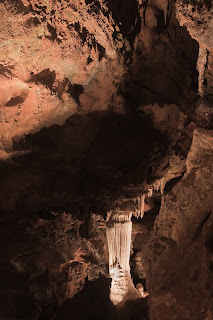 Again, apart from comparing individual aesthetics (you may prefer the color to the duotoned version, or you may not like either image), the point I made to my mom is that as far as my cavern portfolio is concerned, my intent is to communicate certain aesthetic qualities regarding tones, shapes, and textures. The rather drab monotone-like, all-pervasive orange that permeates the "color" image does nothing (for me) in this context, apart from likely diluting a viewer's attention from what otherwise would be her sole focus; namely, the tones, shapes, and textures. In short, color is an unwanted visual distraction (and a preattentive one at that, meaning that we cannot choose to not see it, as it is processed automatically by our brain's primary visual cortex). Thus, color - in this case (from my - the photographer's - point of view) adds nothing essential to the intended aesthetic meaning of the photograph.

Of course, in the end, how an image is viewed (and interpreted) is always a matter of personal taste and predilections. I suppose, one could (as an artist) provide a "multiverse" of aesthetic possibilities to viewers (generating not one image but dozens, hundreds, or even millions!... by creating versions in color, black and white, solarizations, alternative processes, photoshopped abstractions, etc.), thereby maximizing the probability that any given viewer will find an attractive image buried somewhere within the pile of images put on display. But that entails moving away from art as conceived, practiced, and crafted by the photographer (and the photographer's own, unique aesthetic vision) to another kind of "meta-art" that depends on the aesthetic choices of the viewer;-)
Posted by Andy Ilachinski

Amazing the difference between the black and white cavern shot and the original one in colour.

I remember you visiting this issue before .....and how its been something that I've since been conscious of in relation to my own photographs. Most of my photographs are soft and fragile in terms of look and intention. Colour is needed to convey transient form and mood/atmosphere. However, i now find myself drawn to much stronger edged and powerful forms (architecture and machinery) and for these, black and white is definitely much more suited to my intentions.
Thanks for your continuing inspirational thoughts!
Best Wishes
Kath

I was recently asked about black and white vs colour for my own work recently, and your reflection on the matter has helped me better articulate why I would choose one over the other. Thanks!