A Blurred Path Toward Clarity 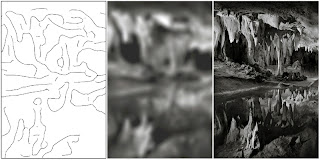 "To be an artist is not a matter
of making paintings or objects at all.
What we are really dealing with
is our state of consciousness
and the shape of our perception."
— Robert Irwin, Artist/Theorist (1929 - )


It has been quite a while since my last blog post; the long hiatus due (as almost always) to the demands and constraints of "day job" responsibilities. As I slowly reacclimate my activities to nurture both parts of my brain, I offer a short and humble blog entry to highlight some recent photography projects and expand upon an observation about "how I do photography" that a friend of mine found interesting in a recent interview I gave (and that others might find amusing to muse on).

First, I am delighted to announce that I have had two portfolios published in the last few months: (1) my Luray Caverns portfolio, which appears in both the print and expanded DVD-editions of Lenswork (issue #95, Jul/Aug 2011), and (2) my Abstract Glyphs portfolio, spotlighted on pages 72-75 in the December 2011 issue of B&W magazine (images also appear on their gallery page).

While listening to my interview with Brooks Jensen (editor, Lenswork) for the DVD edition of issue #95, a friend of mine was intrigued to learn of a particular habit I picked up early in my photography (when I was just learning the art in my late teens, a few centuries ago ;-) I'd be interested in learning if others have had (or have) the same experience.

In recounting to Brooks how I started off my day-long sojourn to Luray caverns, I noted that for the first 30 minutes or so I just walked around without a camera (as I always do) and without my eyeglasses on (also, as I always do). Because I am very nearsighted, seeing the world without my glasses yields an almost abstract - certainly much simpler, distilled - representation of it. Since my eyes sans glasses provide only rudimentary information about shapes and tones, I find it a useful exercise to first "see" my compositional landscape (as it were) in these aesthetically simple terms, before fully investing - and immersing - myself in finding real photographs in it. This has been a vital part of my creative process for well over 35 years. But it started quite by accident.

When I was just starting out in photography, I found the physical act of using the viewfinder on a camera hard on my eyes. The constant shifting between squinting through the camera followed by focusing on something in the distance quickly tired my eyes. So, after even a few shots, I would usually take off my eyeglasses and rub my eyes a bit before resuming my camera work. One day, with my glasses off, I turned to glance in a direction where some commotion was going on. I could make out only some blurry lights and shapes, but whatever was going on it looked "interesting." Without thinking (and still without my glasses, which had also fallen to the ground) I lifted my camera to my eye and - without thinking and unable to really see anything - took a shot. I have long forgotten what that shot was a shot of, but I remember being mesmerized by the thought - later after I developed the film - that it had turned out better than OK; it was a really well-composed, lovely shot! But not one I would necessarily have taken of this subject (namely, a scene with people in it!) had I had my glasses on. The lesson taught me to always first "see" a scene sans glasses.

The middle panel of the triptych shown above depicts, roughly, what I "saw" when I first descended the stairs into Luray's interior. The left panel shows what the scene may look like to a robotic version of Andy that sees the world through an 'edge detect" filter. The right panel shows how a non-robotic version of Andy renders the same scene after he's had a chance to see it with his glasses on ;-)

FYI: a 40-min long mp3 file of my interview with Brooks Jensen is available for download from Lenswork for 99 cents.
Posted by Andy Ilachinski

The nice thing about long absences between posts is that it makes for pleasant surprises for your readers when a new one pops up in the 'stream'.

My heartfelt congratulations on your publications Andy. While it goes without saying I will say it anyway… well deserved Andy. Both of those works, the Caverns and the Glyphs are outstanding.

Thanks Cedric (that was quick! ;-) I have missed blogging, and just the time to peruse the web (blogs, facebook, etc.)...I have much catching up to do!

Your description of your initial walk-through sans spectacles brings to mind a paper I saw last year "diagnosing" the work of some of the prominent members of the Impressionists in the late 1800's.

A number of different causes of their depiction in their works ranged from short-sightedness to "seeing sound" (synesthesia - I just looked it up).

I just wish that I had the talent. For me a photograph is an exercise in trying to defeat the technology to obtain a satisfactory image. The lack of talent means that it usually the wrong image. :) Never mind, it is something I enjoy.