Why the heck is he taking a picture of that?

A while back, I blogged about a series of images I call "Photographing the Photographer" diptychs (or PPDs), consisting of two side-by-side images: one image - taken by my wife - is of yours truly happily snapping away with my camera, oblivious to everything except what is in front of the tripod; the other, is of the "final print" of whatever it was that caught my attention at that instant. While the dissonance between the "final print" and the - sometimes bizarre - postures I assume while setting up a shot (and/or puzzling places in which I set up my tripod to begin with!) was not as great as in past adventures (e.g., look here and here), my wife managed to catch me "in the act" during three shots I took during our recent trip out west (see previous blog entries). Of course, each has its own story.

In the diptych at top, I recall both our boys (Noah, 13, and Josh, 9) circling around, curious about what caught my eye. "Is there a bird?", Noah asked. "A frog?" inquired Josh. "Just a log, guys," I answered. They gingerly walked up to the nondescript log by the water, giggled, and with an obligatory, "Dad, you are so weird!" went back to frolicking about the lakeshore (we were standing at the northern end of Yellowstone lake). In truth, it was more the light, and the play between the light, grass, and contrast between the log and grass that caught my eye, but my hunch is that a fuller "explanation" would have induced more giggling.

In this shot, I stood locked in my hunched position (for which my back repaid me later by locking up completely at night) for 30-45 min, moving ever so slightly left-right / up-down trying a number of subtlety different compositions. My kids (along for a family hike at Bear Lake, CO) did not even bother to stop to inquire, though I caught a "Yep, at it again" as they made their way up the trail. I did get a few quizzical looks from passerbys, one commenting to another (a bit too loudly I thought), "Why the heck is he taking a picture of that?" This abstract root-contusion is among my favorite shots of the whole trip! 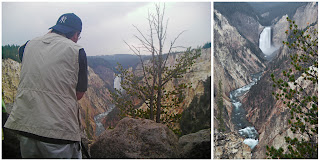 This final diptych finds me hunched over a a shot of Yellowstone's Lower Falls. In contrast to the earlier images, in which I "slaved" over myriad attempts to find a pleasing composition, I took but one shot here (worth keeping), but had to stay glued to my spot for what seemed like an eternity because of the swarm of visitors, a few of whom - sad to say - were less than polite. I was stomped on, pinched, shoved, yelled at (true!), had my tripod yanked (twice!), and even had to do a quick duck and cover to save my camera as a burping baby got a bit too close for comfort with recent-meal-induced projectiles. Though I needed no more than 10 sec to compose and click, it took 10-15 minutes (!) to find a stretch of uninterrupted time into which I could fit those precious 10 sec! As I got my shot, and turned to leave, I found my wife quietly and contentedly standing behind me, having gotten her shot of me almost immediately after I set up my tripod. Smiling (and in mock resignation), she simply asked: "Just how long does it take you to get a simple shot?"

Postscript. I was "yelled" at for having the gall to wear a NY Yankees hat in Wyoming... what insolence! ;-)
Posted by Andy Ilachinski

What a great idea, Andy, to document your process of creation! So sad you had to encounter such rude people during your trip. I wonder if Ansel Adams had to contend with such harassment!

Thanks for posting this, Andy. Now I know that I am not alone with such reactions. Patient goodwill from the side of one's family most probably is a decisive factor of success for us.

This is really a neat idea. I particularly like the 'real life' in color with the black and white finished image as it gives a feel of 'transition' from the live shot to finished art.

I gotta hand it to you.....I don't even try to do 'real' photography on a family vacation!

Howard, while I think I got some "keepers" from the trip (well, perhaps one "real" keeper, the 5-image-stitch panorama of sunrise at Grand Teton I posted last time - and a 3 foot print of which now hangs in my office!), I knew going in that this was NOT a recipe for photography ;-) Goodness sake, we had an RV in tow...except for the three days we rented a van (in Grand Teton) the whole family was in tow, with yours truly getting 5 min here and 10 min there. Still, no complaints...great place, many opportunities for quick grabs, and a heck of a fun time :-)

Glad you survived the hordes and got your shot! I stopped by the falls at 7 AM on a Sunday morning--the parking lot was completely empty and no one else showed up until after 8. Highly recommended!