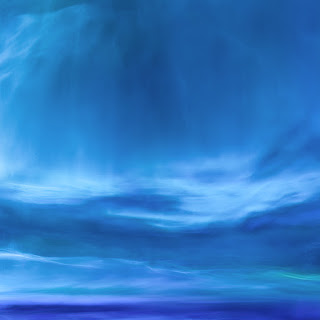 "As human beings, we are part of the whole stream of life. We have been human beings for perhaps a million years. But life itself — passes on something of itself to other life — that mysterious entity that moves and is aware of itself and its surroundings, and so is distinguished from rocks or senseless clay — [from which] life arose many hundreds of millions of years ago. Since then it has developed, struggled, adapted itself to its surroundings, evolved an infinite number of forms. But its living protoplasm is built of the same elements as air, water, and rock. To these the mysterious spark of life was added. Our origins are of the earth. And so there is in us a deeply seated response to the natural universe, which is part of our humanity."

Hi Andy... I see you've got the blues? Your visual feelings are fascinating for a physicist. Um, of course scientists have feelings but there's the thinnest line between the wonder of scientific possibility and the dispassionate discipline of scientific methodology. Here on "Tao" you continue to entice me with the wonder-stuff, which brings to mind the saying, "Art without wonder is merely craft."

In these last three posts you wrestle with this space in which the mystical/spiritual swirl about the Spock-like pathway of perceived order. "Fascinating". While each of the inspirational quotes do support your visual speculation, I wonder how you'd also deal with a quote from that legendary philosopher Arthur C. Clark - "A sufficiently advanced technology is indistinguishable from magic." Can physics reach out and touch faces of the gods? Can art? Thanks for the wondering...

BTW, have you heard anything from Cedric Canard (who turned me onto your work)? PLOP's been cleaned out, as if one night moving vans arrived and left the space a bare white?