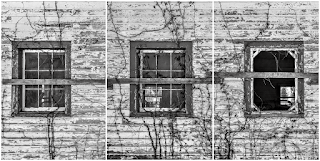 "The law that entropy always increases holds, I think, the supreme position among the laws of Nature. If someone points out to you that your pet theory of the universe is in disagreement with Maxwell's equations - then so much the worse for Maxwell's equations. If it is found to be contradicted by observation - well, these experimentalists do bungle things sometimes. But if your theory is found to be against the Second Law of Thermodynamics I can give you no hope; there is nothing for it to collapse in deepest humiliation."

Postscript. One of the first major publications that some of my work was featured in was Black & White magazine, way back in issue #41 (Feb 2006). The images were from what I called my "entropic melody" series. But the "melody" part applies equally to the images (as in "living melodies of otherwise visibly decaying parts") as it does to the - still ongoing - process of creating them (on a vastly different space and time scale). Though I like to think of my "synesthetic landscape" series as my longest "in progress" portfolio, the truth is that - having started "only" in 2009 - it takes a back seat to something I believe I'll never tire of: finding "life" in lifelessness. And so, on a recent "long weekend" vacation with my wife and youngest son (also a photographer), and armed with this spur-of-the-moment self-reflection, I found my eye and lens trained not (entirely) on the natural beauty in the West Jefferson area of North Carolina (of which there is plenty to be had, to be sure!), but rather on the regions' splendors of human-created and now neglected decaying beauty. Looking over the 30 or so "keeper shots" I returned home with, no less than 25 of them are of nothing but "withered but beautifully decrepit" sentinels - and occasional palimpsests - of  times past. And, for the photographer, a glimpse of a longer-term "melody" playing out in an always evolving aesthetic landscape. I will be featuring a few of my favorites from this short-much-too-short trip in the coming days.