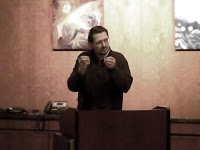 The opening reception of the Worlds Within Worlds exhibit (held at the American Center for Physics, One Physics Ellipse, College Park, MD, 20740, on Monday, November 16, 2009) was - by all accounts - a resounding success. This is due, in no small measure, to the curator Sarah Tanguy, who not only assembled an extraordinary physics-inspired collection of art, but quite an impressive spread of delicious gourmet-quality food and drink. Thanks Sarah!

I was also impressed by how many people showed up. I honestly did not know what to expect coming in, but had assumed that since the exhibit is being held inside a physics building - let's be honest, not exactly the Guggenheim ;-) - attendance would either be light or nonexistent. "Perhaps a few stray physicists who have momentarily lost their way to the library?" I predicted to my wife (being myself a physicist I can truthfully assert that "absentmindedness" is almost always a genetic trait;-) Much to my surprise (though not my wife's, who is infinitely more optimistic about such things, and is - lesson here? - almost always right!) there were between 70 and 80 people at the opening, almost all of whom - as far as I could tell - appeared to have had actually planned on being there. Indeed, many wore fancy black ties and suits, so I felt a bit of place, decked out as I was in my day-job "standard" dark slacks and sweater.

After schmoozing with attendees for about an hour or so (and nibbling on samosas, some fine cuts of tenderloin, and other assorted hors d'oeuvres), Cynthia Padgett - the only other artist of the three-artist exhibit present at the reception (Julian Voss-Andreae was unfortunately unable to attend) - and I were asked to say a few words in the main reception/banquet hall. Cynthia opted for a quick Q&A session with Sarah, which worked out well, as the audience - and I - learned something about her creative process. When my turn came, I pursed my lips, cleared my throat, performed a quick mental Ralph-Kramden-like hammana-hammana-hammana stammer, walked up to the lectern...and proceeded to kick off my talk with a reference to Poincare sections and multidimensional aesthetic landscapes (true... and likely the first and last time such topics will be mentioned during a talk on photography!).

My wife was kind enough to videotape the entire proceedings, including my talk. I've included a ~7 min clip - that you can see by clicking on the image at the top of this blog entry - that discusses the origins of my "Micro Worlds" portfolio (three images of which are included in the Worlds Within Worlds exhibit" - however, in interests of preserving my readers' sanity, I've left out the part on Poincare sections and multidimensional aesthetic landscapes;-). At best, the clip shows that photographers can, if pressed, actually say something half-way intelligible about their photography; at worst, it demonstrates that they should stick to photography ;-) I'll let you, kind readers - and, if you are inclined to click on the link to the video - kind viewers, judge for yourself.

The exhibit runs through April 10, 2010.
Posted by Andy Ilachinski

Great talk and honestly I can't believe you threw the stories together at a moment's notice! I remember that portfolio from LensWork very well....truly marvelous images and amazing how they started with a chance event meeting an unusual object interpreted by the open mind! I am glad you posted this as somehow hearing a live person gives more of a personal 'connection' than merely the printed word.