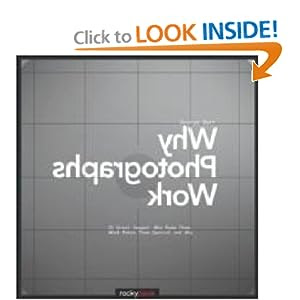 About 35 years ago, the late great curator of photography at the Museum of Modern Art (MOMA) in NY, John Szarkowski, published a landmark book called Looking at Photographs. Intended as "... a picture book, and its ...purpose ...to provide the material for simple delectation" (according to Szarkowski, from his own introduction to that book), it was, and is, considerably more, giving life to Szarkowski's always thoughtful ruminations about 100 pictures from MOMA's collection and food-for-thought for all aspiring photographers. Also around the same time (in 1983, shortly before his death), Ansel Adams published his Examples: The Making of 40 Photographs, in which the master provides narratives about 40 of his favorite photographs, engaging readers in the technical and aesthetic dimensions of photography. These two books are almost always found (typically, and notably, in excruciating dog-eared form!) on the bookshelves of virtually every photographer who has bought at least two books on photography!

And now - a mere 30 or so years later - comes another destined-to-be classic in the same mold, George Barr's Why Photographs Work: 52 Great Images Who Made Them, What Makes Them Special and Why.

This is not to say that there have not been similar "picture books" published in the intervening years. In truth, one could argue that there are too many, as the quality seldom approaches Szarkowski's and Adams' volumes. Certainly, very few books in this genre approach the simple, understated elegance of Barr's new book; fewer still share the same attention to detail. And seldom have I seen such a magically diverse and exquisite collection of photographs that just sing.

In what must have been a logistical nightmare of solicitation and coordination (done entirely by email), George has assembled a veritable What's What of great images (52 of them, and taken by a veritable Who's Who of today's photographers, though not all assembled here are well known; though they all will be now that the book is out!)

The idea behind the book is not to discuss "selected images" (as representative "snapshots" used to illustrate a discourse on some photographer's life's oeuvre); rather the single focus is on simply presenting - in Szarkowski's "picture book" book fashion - great images and musings about what makes them so great. And they all are! (great, that is; Kudos to George for his selective eye).

The book contains exactly one image each by 52 photographers; some famous, some becoming so, some obscure (but clearly on the rise, given the artistry of images). As George states a number of times (and makes an eloquent case for), there is something about great images that is immediately clear, without further exposition. Why this is so, a question that is often asked by those deeply interested interested in photography but who have not yet spent half-a-lifetime looking at and creating images, is where this book shines, first with George Barr's inspired commentary, followed by the photographer's own story about how his or her selected image came to be, what their creative approach consisted of, what technical and/or aesthetic difficulties they had to overcome, and so on. A brief bio of each photographer is also provided, along with email addresses and website links for interested readers to continue exploring.

The most important part of the book, apart from the commentary - namely its images - are all nicely presented on the left hand page as you open to a given photographer's "section" and are reproduced in as large a size as the book size permits (maximum of about 9 inches longest side), with about an inch margin along the sides. Indeed, with the typical ~30% Amazon discount over the official list price, it is tempting to purchase two copies, so that the images from one can be taken out and framed to hang on the wall!

Some of the photographers are familiar to me, either because I've seen their work in magazines and journals, or - in some cases - I already own a book or two of their photographs; though, in some cases, I had not seen the particular images displayed in the book. Other photographers I am less familiar with or have not heard of at all; though, in all such cases, and as a testament to George's aesthetic tastes (in selecting images for his book) and skills as a photography critic-commentator, I now intend to look up more of their works! All types of images appear: landscapes, portraits, abstracts, formally arranged, manipulations. Most are in color, but there is a generous sampling of exquisite black and white images as well.

So, are there one or two "universal" truths that emerge after reading this wonderful book? Having read the book twice, and perused it a few more, flipping back and forth, and rereading various sections, two things stand out (though perhaps somewhat implicitly; the gestalt having been assembled by me rather than as an explicit "lessons learned" that appears in the book...if I have one minor complaint, it is that I would have liked to read George's take on the "whole" in a concluding chapter; but his introduction serves the essential purpose): (1) image simplicity (one or at most a few "main" elements and/or colors) coupled with a mastery of the complex technical skills necessary for proper presentation (the camera, lens, darkroom, Photoshop, printer, etc all become "automatic" extensions of the mind/soul of photographer), and (2) mystery (the best images tend to be the ones we want to return to again and again, and those that we feel that way about tend to be the ones for which the most open - and interesting - questions remain lingering in our mind long after we last saw the image). Certainly the book itself qualifies on both counts (albeit on a slightly "meta" level); I know I will return to it again and again, sure to be rewarded with fresh insights, new stepping-stones for my own aesthetic journeys and the simple pleasure of viewing some exquisite photographs.

I can see a series of "Why great photographs work" books appearing in the coming years, as new images - and new talents - emerge. We can only hope that the publishers, should they decide to launch such a series (I would encourage them to do so), would see fit to have none other than George Barr behind the helm. George is uniquely gifted both as a practicing photographer (with over 35 years experience) and as a teacher/author. There are as many great photographers (who have a hard time explaining how to set a proper f-stop to a novice) as there are great authors (who are hard-pressed to capture even a "not so great" photo), but very, very few who are truly great at both. George, with countless images and portfolios published, and now with three expository books behind him, is in a rarefied class indeed!

I believe that George's new book - Why Photographs Work: 52 Great Images Who Made Them, What Makes Them Special and Why - will become a "classic" (along the lines of Szarkowski's and Adams' earlier collections. Anyone interested in why photographs work - and what they can do to improve their own "eye" and completed images - should have a copy (or two!) on their shelf! Nicely done George!
Posted by Andy Ilachinski

First Andy, Thank you for coming by Levonne's Pretty Pics and leaving such a thorough comment which was also supportive. I appreciate it! Secondly, I appreciate your review of George's book. I can't wait to hold it in my hands. Thanks so much for the recommendation!

Good Book
Striking how many photographers are using film