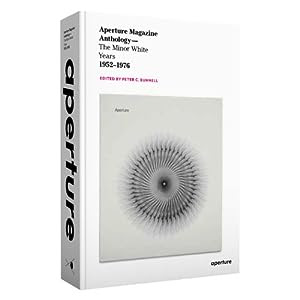 Continuing on with my recently started series of discussing / reviewing photography-related books that are a bit "off the beaten" path (i.e., not necessarily those that one would find on shelves at the neighborhood Barnes and Noble store but which would be of interest to the dedicated photographer), we introduce the first of two anthologies of magazines that are still around but containing articles once published a generation (or more) ago.

The first is Aperture Magazine Anthology: The Minor White Years, 1952-1976, edited by Peter C. Bunnell and published by Aperture (the second will be revealed in my next post). As the title suggests, Aperture was founded in 1952, and counted among its founders such luminaries as Minor White, Ansel Adams, Dorothea Lange, Barbara Morgan, Dody Weston Thompson, Nancy Newhall and Beaumont Newhall. Inspired, at the time, by the memory of Alfred Steiglitz's long defunct Camera Work (published by Stieglitz from 1903 to 1917), the original incarnation of Aperture continued Camera Work's devotion to quality reproductions, and added a generous bounty of thoughtful essays, commentaries, and reviews. Aperture's appearance coincided with an important crossroad at which fine-art photography found itself at that time, which in a sense mirrored a similar crossroad met head-on by Camera Work. Camera Work was conceived as a publishing vehicle to establish - and promote - photography as something more than "just" a mechanical means to mechanical means of reproducing "images out there, in front of a lens" (see Photo Secession); i.e. it sought nothing less than to establish photography as a fine art. Arguably, and in almost all important respects, it succeeded laudably in this goal.

When Aperture arrived, some 35 years later, the "fine art" of photography had again come under assault. But this time - ironically - not because people did not accept photography as a bona-fide art form (the efforts of Stieglitz, Adams, Weston, and others had made sure of that!), but rather because so many simultaneous channels of expression had arisen in the intervening years - from the social-documentary-style that came into vogue in the 1930s to the new photojournalism introduced by Life in the 1940s to a new breed of photography that is now called "street photography" and honed to early perfection by Henri Cartier-Bresson - that the focus on "fine art" photography, for its own sake, had started to wane. And so, by the time Aperture arrived in 1952, the photographic world was ripe for a renewed discussion of photography as art.

Included in the 40 reprinted essays (by such masters as Adams, Newhall, Wynn Bullock, Aaron Siskind, Carl Chiarenza, and Frederick Sommer, among others) are 14 essays by White himself, making this an indispensable resource for admirers of Minor White and his philosophy of photography as a spiritually infused creative medium (a group to which I unabashedly admit my membership). The collection also includes a complete index of articles appearing in Aperture magazine from 1952 to 1976. Since (IMHO, and as I've written a few words about before) later versions of Aperture - beginning with perhaps the very first issue published after White's departure (he died in 1976), and including the run through the most recent issues - took the magazine onto a vastly different - dissonant even - path from the one it would have likely followed had it still been under White's leadership, those readers and photographers who - like me - feel a certain revulsion to the "shock element" that characterizes so much of today's "art photography," will cherish the timeless wisdom of a bygone era contained in this book. My only lament is that this anthology is not (yet?) available as an eBook.
Posted by Andy Ilachinski

I too lament the state of contemporary photography and see it as simply a manifestation of our cultures need for incessant titillation rather than contemplation. The "shock jocks" are only too willing to supply this craving, whether it is in photographs or films. What we need is another Minor White to shake some sense into us!

It's a great book and, other than the first essay on small cameras, I enjoyed it, and learned, a helluva lot. Sadly, it has no modern day equal. Even sadder still, there are few people around today that can even talk intelligently and rationally about photography, as an art. We have lost our way, me thinks.