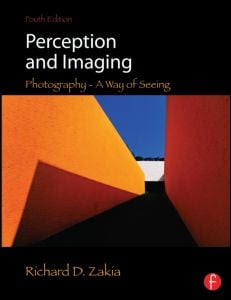 "My earlier writings dealt with some of the technical aspects of photography. Recent writing attempts to integrate information from other disciplines and relate it directly to the understanding of photographs in particular and to pictures in general. Each discipline has its own vocabulary in dealing with philosophical issues such as truth, reality, and values . . . my interest is to build conceptual linkages among various disciplines by utilizing pictures . . . What is the visual equivalent of linguistic terms such as metaphor, metonymy, and synecdoche?" - Richard Zakia (1925 - 2012)

I mentioned in my blog entry that I'd like to devote some attention to discussing / reviewing some photography-related books that are a bit "off the beaten" path; i.e., books that are not necessarily something one would find on shelves at the the soon-to-be-closed Barnes and Noble store but which would be of interest to the dedicated photographer.

So, to start off this series, I enthusiastically point kind readers to a new edition of Richard Zakia's Perception and Imaging (scheduled to be released on March 22, though this last edition does not appear to be much different from the previous one, at least judging by page count and the available description. But whichever edition is the object of focus, this is certainly a book that anyone interested in exploring the visual, psychological, and philosophcial dimensions of photography will want to spend some time with. The second edition (from 2001) is available for less than $10! Indeed, even the earliest available version from 1975, which I own and still treasure, is a treat despite measuring in at less than half the size of its latest incarnation (and is also available on Amazon for 3!). Sadly, since Mr. Zakia died in 2012, this will be the last edition (at least authored solely by him) to appear in print.

Richard (born Rashid Elisha) Zakia is considered by many to be one of the great photography teachers of his generation in the United States. Having graduated from the Rochester Institute of Technology (RIT) in 1956 - and enjoying classmates such as Carl Chiarenza, Peter Bunnell, Bruce Davidson, Ken Josephson, Pete Turner, and Jerry Uelsmann (along with Minor White and Beaumont Newhall as teachers) - Zakia began his career as an engineer at Eastman Kodak before returning to RIT where he stayed on as professor for 34 years. At one time or another, he was Director of Instructional Research and Development, Chair of the Fine Art Photography Department and graduate program in Imaging Arts, and, in later years, professor Emeritus. In all, he authored and co-authored thirteen books on photography and perception, co-edited (along with Leslie Stroebel) the third (1993) edition of The Focal Encyclopedia of Photography (and contributed to the fourth edition in 2007, my review of which appeared shortly after it was released), and, immediately prior to completing his last book, co-authored a book on Teaching Photography with Dr. Glen Rand.

While all of Zakia's books are worth reading and studying, it is his Perception and Imaging that I come back to again and again. Partly to relearn some fascinating theories and approaches, partly to just marvel at this extraordinary encyclopedic cornucopia of wisdom; and partly to just be inspired by the collection of quotes and insights so lovingly chosen and inserted in the margins to accompany the main text.

A mere list of chapter headings indicates the sweeping breadth of subject matter, though hardly does justice to the depth of coverage or the elegance of presentation: figure-ground theory; gestalt; memory and association; space, time, and color; contours; illusion and ambiguity; morphics; personality; subliminals; critiquing photographs; and rhetoric. This is not a "poetic" book on photography - that is, it spends little or no time on describing or probing Minor-White-like "Zen" musings about photography (though it does provide a great introductory discussion of Stielitz's and White's "equivalents" and even has more than a few cogent words to say about synesthesia, a subject close to my own heart! - rather, Zakia's book is mainly about what its title says, perception and imaging.

It teaches you all about how to better see the world, how to better understand how you see, and how to exploit how the world appears to us in designing ways to communicate what we see to others. It also fosters a deep appreciation of the myriad layers of perceptual meaning and ambiguity. Strictly speaking, it cannot even be said that the book is "about" photography at all, since it touches on so many different aspects of art, composition, design, and presentation. But to all those photographers who like to both feel and think about their art - and are interested in exploring ways to take their photographic "eye" to a higher level of appreciation and understanding - this is a book to treasure! Highly recommended.
Posted by Andy Ilachinski

Thanks for the hint, Andy. While being very interested in that 'perception' complex, I was not aware of Zakia (his books are not translated into German) before. Now I am curious about his approach.

Thank you for this latest bit of inspiration, Andy! What fans the flame of our individual creative endeavor can come from anywhere and at any time...the important thing is to keep an open mind and a searching heart!

Thank you Andy. I am relatively new to photography, but I am in love with it. It is a great stress relief for me when my work week is done. I love to go to my local parks, and just take photos of nature. I think I will check out Perception and Imaging for my next read. Thank you for the insight.

I finally got my (old) copy of "Perception and Imaging" and can happily state that this is the one book with a different style in teaching photography, anchoring it solidly in the history of art and perception and explaining the theoretical foundations that make images work. Thank for the hint to this valuable ressource.