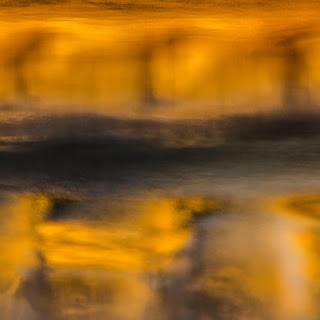 "There is the motion, the actual wave and radiation of the darted beam: not the dull universal daylight, which falls on the landscape without life, or direction, or speculation, equal on all things and dead on all things; but the breathing, animated, exulting light, which feels, and receives, and rejoices, and acts — which chooses one thing, and rejects another — which seeks, and finds, and loses again — leaping from rock to rock, from leaf to leaf, from wave to wave — glowing, or flashing, or scintillating, according to what it strikes; or, in its holier moods, absorbing and enfolding all things in the deep fullness of its repose, and then again losing itself in bewilderment, and doubt, and dimness ... It is the living light, which breathes in its deepest, most entranced rest, which sleeps, but never dies."


Postscript: Ruskin's quote was inspired by his devotion to J. M. W. Turner's art (as is my Synesthetic Landscape that appears above it). I have been thinking of Turner lately because I've started reading what is turning out to be a magnificent new biography: The Extraordinary Life and Momentous Times of J.M.W. Turner, by Franny Moyle (Penguin Press, Oct 2016).
Posted by Andy Ilachinski