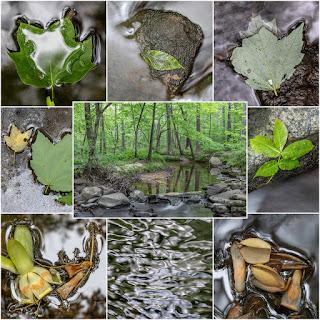 "Humboldt revolutionized the way we see the natural world. He found connections everywhere. Nothing, not even the tiniest organism, was looked at on its own. “In this great chain of causes and effects,” Humboldt said, “no single fact can be considered in isolation.” With this insight, he invented the web of life, the concept of nature as we know it today. When nature is perceived as a web, its vulnerability also becomes obvious. Everything hangs together. If one thread is pulled, the whole tapestry may unravel."

"Mere communion with nature, mere contact with the free air, exercise a soothing yet comforting and strengthening influence on the wearied mind, calm the storm of passion, and soften the heart when shaken by sorrow to its inmost depths."

Postscript: If there is any solace to be found during this difficult time, it is - as Humboldt reminds us - but a mindful nature-walk away. This montage reveals some of the (usually invisible, if not simply ignored) "Humboldtian threads" that quietly weave their way through the small neighborhood park in which my younger son and I now regularly take our late-day rejuvenating saunters.
Posted by Andy Ilachinski