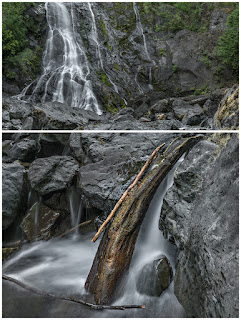 "There are only two worlds - your world, which is the real world, and other worlds, the fantasy. Worlds like this are worlds of the human imagination: their reality, or lack of reality, is not important. What is important is that they are there. These worlds provide an alternative. Provide an escape. Provide a threat. Provide a dream, and power; provide refuge, and pain. They give your world meaning. They do not exist; and thus they are all that matters."

Postscript. This is a different view (or diptych-ed views) of the same Rocky Brooks Falls (near Dosewallips State Park, on the part of the Olympic Peninsula that faces the Hood Canal in Washington state) I uploaded a different picture of a few months ago. While, as I described in that earlier blog post, the falls themselves are almost embarrassingly easy to get to (since they are less than a 1/4 mile away from a small parking area), maneuvering in and around the falls in hopes of finding a better composition than the obligatory "Here is what my wide angle lens can capture!" is difficult; well, at least it's difficult for a 60yo with 59 years or so of wear and tear on the knees :) With the help of one of my sons (who was kind enough to act as a carry mule for my camera bag and tripod), I managed to catch either one or two non-obligatory shots (depending on how you slice the diptych) from a point well in front of the main falls (from which the bottom-most part of the falls is invisible). I think that while each "part" works well on its own, as an image, they are self-contained enough that the diptych adds a bit of contextual "interest." The relatively small area into which these falls descend has the remarkable property that just about any spot one stands on seemingly offers a veritable infinity of "different" compositions. Though it is, in truth, far more typical than not for photographers to feel this way about any spot (!), I have found this particular waterfall to be blessedly infused with this magical property more so than most. Despite having already taken close to a hundred different shots during our two trips (thus far), I am already looking forward to my next visit :)