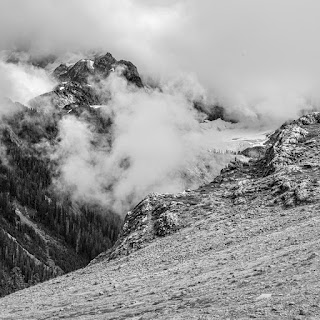 "I hope you had a most delightful trip in the High Country, and that you were benefited in mind and soul and body by the divine influence of the mountains. I think nothing can be compared to the Hills for the elevation of spirit, and peace of mind, which they produce in man when he lives intelligently among them. All aspects of nature lead to elevation and knowledge when you once have the idea. The commonplace growth of weeds beneath a pile of refuse appear to shine with the divine light when you know the meaning of the world and sense the unity of all things. In a great city the buildings, the machinery, the works of art, everything produced by man, are naught but the material expression of ideas. We look on lines and forms and masses of what we call matter, and we know these things existed in the mind of man in the form of ideas before they were expressed in the physical world in the form of matter. I look on the lines and forms of the mountains and all other aspects of nature as if they were but the vast expression of ideas within the Cosmic Mind, if such it can be called. With that outlook, I am assured there is nothing in the Universe that is not the expression of mind or of life."