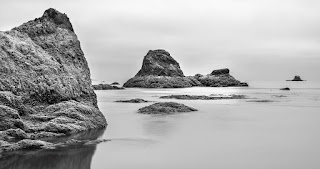 "Neither religious nor artistic contemplation should be regarded as 'things' which happen or 'objects' which one can 'have.' They belong to the much more mysterious realm of what one 'is' -  rather 'who' one is. Aesthetic intuition is not merely the act of a faculty, it is also a heightening and intensification of our personal identity and being by the perception of our connatural affinity with 'Being' in the beauty contemplated.


In the case of a Zen artist, there is ...no artistic reflection. The work of art springs 'out of emptiness' and is transferred in a flash, by a few brushstrokes, to paper. It is not a 'representation of' anything, but rather it is the subject itself, existing as light, as art, in a drawing which has, so to speak, 'drawn itself.' The work then is a concretized intuition: not however presented as a unique experience of a specially endowed soul, who can then claim it as his own. On the contrary, to make any such claim would instantly destroy the character of 'emptiness' and suchness which the work might be imagined to have. For the Zen man to pretend to share which 'his' experience would be the height of absurdity. Whose experience? Shared with whom? The artist might well be brusquely invited to go home and consider the question: 'Who do you think you are, anyway?' I do not know if this question is recorded among the traditional koans, but it deserves to be.

A disciple once complained to a Zen master that he was unsettled in his mind. The master said: 'All right, give me your mind and I will settle it for you.' The disciple's helplessness to pick up his mind and hand it over to somebody else gave him some idea of the nature of his 'problems.' One cannot begin to be an artist ... until he has become 'empty,' until he has disappeared."