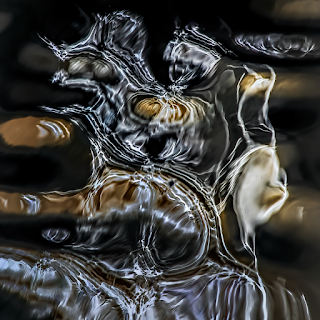 "Paul uncovered his eyes, and looked around the room. Away from a few dazzling patches of direct sunshine, everything glowed softly in the diffuse light: the matte white brick walls, the imitation (imitation) mahogany furniture; even the posters — Bosch, Dali, Ernst, and Giger — looked harmless, domesticated. Wherever he turned his gaze (if nowhere else), the simulation was utterly convincing; the spotlight of his attention made it so. Hypothetical light rays were being traced backwards from individual rod and cone cells on his simulated retinas, and projected out into the virtual environment to determine exactly what needed to be computed: a lot of detail near the centre of his vision, much less towards the periphery. Objects out of sight didn’t “vanish” entirely, if they influenced the ambient light, but Paul knew that the calculations would rarely be pursued beyond the crudest first-order approximations: Bosch’s Garden of Earthly Delights reduced to an average reflectance value, a single grey rectangle — because once his back was turned, any more detail would have been wasted. Everything in the room was as finely resolved, at any given moment, as it needed to be to fool him — no more, no less.
...
Paul closed his eyes and turned his face to the sun. In spite of everything, it was hard not to take solace from the warmth flooding onto his skin. He stretched the muscles in his arms, his shoulders, his back -- and it felt like he was reaching out from the "self" in his virtual skull to all his mathematical flesh, imprinting the nebulous data with meaning; binding it all together, staking some kind of claim.
...
Existence was beginning to seduce him. He let himself surrender for a moment to a visceral sense of identity which drowned out all his pale mental images of optical processors, all his abstract reflections on the software's approximations and short-cuts. This body didn't want to evaporate. This body didn't want to bale out. It didn't much care that there was another - "more real" - version of itself elsewhere. It wanted to retain its wholeness. It wanted to endure."