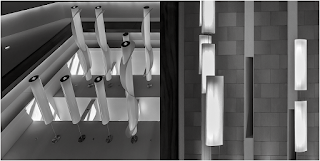 "...there seems to be at least two distinct forms of identity that consciousness can take on, both of which we recognize as the 'I.' The first, and the one usually experienced during ordinary states of consciousness, is the 'I' of the ego; the 'I' of the cognitive models constructed by the brain. The second is an 'I' that seems to be independent of the ego and of life in linear time; a transcendent 'I' that seems to exist entirely beyond time, space, and life itself, and whose identity is more profoundly recognized as the true 'I' than the relatively provincial and flattened notions of the ego. The implication of this is that a hypothetical, universal field of consciousness must somehow 'clot' into multiple, separate 'focal points' in a realm of reality beyond that of the physical brain. Each of these focal points must then correspond to a transcendent 'I' that is coupled, in awareness, to the electrochemical signals of an individual brain and its ego constructs."

Postscript. As I alluded to a few blog posts ago, owing to this will-it-ever-end-pandemic, my photo-safari opportunities are - as for most of you - few-and-far-between. Thus, quality "photography time" nowadays amounts to either immersing myself in an unfathomably deep gorge of unprocessed raw files or looking to make this gorge even more unfathomably deep by saving an endless stream of impromptu "experiments" with light and form in my home studio (i.e.,  my day-job work desk after I clear it of my day-job notes and scribbles). The diptych above (as well as the one from yesterday) combines these two practices; i.e., they are "experiments in abstraction" captured a few years ago with my iPhone. Yesterday's images are of two ceilings, one in a local grocery store, the other at a local department of motor vehicles (where I sat, bored, one day in 2017, while waiting for one of my sons to test for his driver's permit). Today's images come courtesy of a local mall. There is appreciable comfort (from my otherwise omnipresent angst over few-and-far-between photo opportunities) in knowing that there are always wonders to be discovered, even if such "discoveries" are of discoveries made long ago!