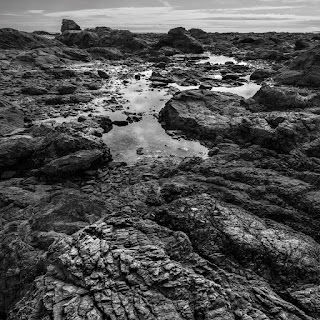 "The path my feet took was lined with images, whole gardens of pictures. With exposures I picked bouquets, each more vivid than the previous...finally a gathering of gem-like flames in the low tide...I thought I had forgotten how to use my camera, so I counted each step of the process aloud...shutter speed, aperture, cock the shutter...Though I feared to lose the sense of beauty, no loss occurred; the sense of rapport was strong beyond belief.

While rocks were photographed, the subject of the sequence is not rocks; while symbols seem to appear, they are pointers to the significance. The meaning appears in the space between the images, in the mood they raise in the beholder. The flow of the sequence eddies in the river of his associations as he passes from picture to picture. The rocks and the photographs are only objects upon which significance is spread like sheets on the ground to dry."