Previsualization ...or... Why Ansel Adams Could Never be Happy With a Point & Shoot Camera 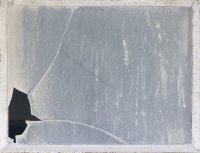 "You don't take a photograph, you make it." - Ansel Adams

Ansel Adams introduced the idea of previsualization into the photographer's lexicon (see my earlier Blog entry on Adams); a term he used to label the importance of imagining, in your mind's eye, what you - as a "photographer" (not just a snapshooter) - want the final print to reveal about a subject (and to communicate of your artistic vision). Without this preconception, wherein much of the artist's creativity resides (specifically, in the implicit steps that must be followed, starting with composition, focal length, shutter speed, filtration, and so on, in order to achieve the previsualized image), the resulting "photograph" is at best a product of inspired "luck" (or intuition) and, at worst, shallow and unable to communicate meaning.

A common "lament" of many of today's amateur photographers - particularly those who fancy themselves as following in the footsteps of pioneers such as Adams - is that their point & shoot camera (or, worse, their super-duper-sophisticated, modern digital single-lens reflex, or DSLR) simply doesn't produce the kind of pictures they want; or, though it is rarely stated this way, doesn't produce what they see in their mind's eye!

The reality, of course, is that no camera, however sophisticated, can "guess" what is in the artist's mind, and then, having correctly guessed, perform whatever digital prestidigitations are required to produce the "perfect" digital file; a file that, moreover, must then also be printed correctly on some chosen combination of printer and paper. It is ironic that as the power of our tools (including cameras, software and printers) increases, and becomes more affordable and user-friendly, the desire to use our tools (to convert a simple point & shoot image into a photograph that more closely resembles an inner vision) generally declines. We expect more out of our cameras; and when the camera (through no fault of its own or its manufacturer) inevitably fails to deliver what we demand, we just as inevitably blame the technology.

The simple lesson of previsualization - that is as applicable today as when Ansel Adams was capturing his spectacular images of Yosemite National Park - is that while one might get lucky, and capture a fine image, the far more likely result of approaching a subject without an idea already in mind is disappointment.


Fine art does not just happen; it requires a (sometimes prodigiously willful) act of inspired, participatory creation. The artist must be a willing and active participant in all of the steps leading up to the image's final (typically print) form; including the act of capture (see my entry on Galen Rowell's participatory photography) and the (often elaborate) digital equivalents of analog darkroom tonal manipulations.

Case in point: consider the two images at the top and immediately below. Arguably, neither the before (straight out of camera) image shown above, nor the after (digitial darkroom manipulation) image that appears at the end of this paragraph belong to the lofty heights of fine-art photography as practiced by Ansel Adams. Indeed, depending on one's aesthetic tastes, neither image may even be terribly "interesting" to look at;-) However, despite the fact that the two images are visual imprints of the same thing (a broken window), no one will argue that they are very different! 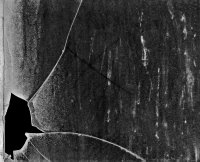 I can confidently assert that the after image is precisely what was in my mind's eye when I pressed the shutter. More to the point, the objectively rather bland before image of the broken window was very faithfully rendered by my DSLR. But it is emphatically not what I wanted the print to look like, and which I knew I could create by having previsualized the process necessary to get there at the instant I pressed the shutter. The bland before image simply needed a "bit of work" to get it from its "faithful" form, into a state in which I, as photographer, am satisfied that it (at least) stands a chance of communicating a bit of my aesthetic vision.

If you, like me, are moved by the mysterious power of the after image, in which a subtle, ethereal "glow" seems to radiate from the black void (the "existence" and communication of which required the digital equivalent of selective dodging and burning, and an attention to the distribution of tones in the RAW image), you must agree that it would have been a great shame for me to have glanced at my DSLR's output, see the "uninteresting" recorded image, and, with perhaps a sad sigh for emphasis, conclude, "Well, better next time," before deleting the file from my compact flash card!

A nice way to summarize these musings, and as an homage to another of Adams' favorite sayings, is to think of the DSLR's RAW output as an "equivalent" of a musical score (the image "exists" but in an essentially latent, as-yet-unrealized form); what the photographer subsequently does with that RAW file in the digital darkroom is analogous to a performance! (The "performance" can - indeed, undoubtly will - change in time as the photographer's own skills, tastes and "eye" evolve. If there is a single deep lesson that photography teaches us, it is that there is no such thing as the one "true" objective reality ;-)


A few older examples of Before and After images can be viewed on this page.
Posted by Andy Ilachinski

Great stuff, not just on a visual level. I have a lot of the same feelings and attitudes myself regarding my own photography. ( I enjoyed nuclear physics too at the low level I was reqired to take it, because it was also abstact!) It is something that I had to visualize to understand. For me photography or art can be putting such an abstact idea into the visual plane! The reverse situation but it works the same way.

First, it is a lesson to all of us amateur photographers, like myself, that good pictures aren't taken, they are edited, changed, manipulated, and made into what the photographer wants. Created, so to speak. You hit right: the photographer has to see in his mind what a particular picture *can* be, not just what it is, straight off the compact flash card.

I believe it was Michaelangelo who said, to the effect, I do not create the sculpture, I remove the stone that doesn't belong to reveal the sculpture that was present all along. While Michaelangelo used hammers and chisels, we (if I am part of this group, and only from the periphery) use Photoshop, Qimage, SnagIt, and the like on our digital pictures.

Second, this posting gets to the point I have always believed to be true. Good photography as art is not a copy of what one physically sees of a scene. It is what one wants to see or, put better, sees in his mind. This idea takes photography from the simple recording of light rays at a particular time and place to a film (or CCD to a memory card) to art. The art comes from the manipulation of the image into something else that was not physically present at the click of the shutter but is *made* present by the photographer--artist. It is what differentiates a wedding photographer (nothing wrong with that!) from an artist. (Of course, wedding pictures are historical, not generally artistic.)

More so, we can differentiate photography from art (what you have done) from scientific visualizations and pictures that are historical in the sense I used here but also of great beauty in what they represent. Perhaps another posting can look at this aspect?

In short, another fine essay, Andrew. Keep up the wonderful writings and postings.

I agree with David completely on the migration of a RAW file to a print. I just wanted to comment on an often overlooked result of the digital revolution. The ease of image deletion.

I run a small Photo School in Northern New Jersey so I get to watch a number of people rather closely as they interact with their equipment. It always amazes me to watch people looking at that silly little screen and make editing decisions in camera. Just imagine what Andy's Window picture must have looked like. Many, maybe most, would have looked at it, muttered something unkind and deleted it. Having the patience to avoid doing this allowed Andy to turn a picture into a His Photograph and that's what the Art of Photography is about.

With physical negatives it is impossible, with roll film anyway, to selectively delete frames so one has the ability to look back in the future and perhaps recognize what your minds eye was pointing out when you made a photograph. The practice of rapid, permanent editing of digital negatives to "save space" will cost the practitioner many opportunities in the future.

I'm so glad that John Sexton pointed out this Blog in his newsletter. I'm looking forward to absorbing the entire thing. New points of view, especially when so well expressed are a joy to behold.

Just came across your blog doing some research for a photo book I'm developing. I was research Adam's concept of previsualization.

I'm also preparing to shoot my first doc film next year, and your blog has given me a lot to think about.

" there is no such thing as the one "true" objective reality ;-)"

-- but, alas, there are many false,
subjective fantasies.