On the Art of Discovering Photos on a Drab Day

"I find that if I sit down a minute and relax, a solution always presents itself…." - Professor Henry Jones (from Indiana Jones and the Last Crusade)
So there I was, sitting in my car, in the rain, after traveling an hour or so from my home in northern Virginia to a park (I've never been to before) not far from Leesburg: Red Rock Wilderness Park. My wife found the park for me on the web, and read that it has some nice views of the Potomac. I had a few hours to myself - my wife knows well my "Oooh, nice diffused light out there today!" look - and so decided to do a photo-reconnaissance run. And it started out great: no rain, nice cloud cover, nippy but not cold.

But soon I found my Sunday fortunes waning. I got lost - twice - started hearing funny sounds from the engine and had the "check engine" light come on (which turned out to be a minor but expensive service for which I also had to lose a few hours from my "day job" in the coming days), and it started raining, hard. There was really nothing to do once I got there but wait; though, because of the time I lost getting lost, I did not have all that much time to waste. Oh, and my iPhone started running out of juice so YouTube entertainment was going fast as well.

Dire situation all right! Of course, I expected my Russian blood to kick into high gear and make for an afternoon's worth of angst and brooding ;-) What a mess! But wait...I did manage to snap one simple photo with my iPhone to send my wife to show her my predicament. You see a piece of it at the top of this entry: just a simple snapshot out of my windshield. Looking toward Edwards Ferry road, it shows the parking lot and a part of the grainery and stable ruins that are still standing in the park. Predictably, just as I sent the email with the photo, my iPhone died.

So I kept staring out my window, feeling sorry for myself, cursing the weather, cursing the battery in my iPhone, daydreaming a bit, but also becoming increasingly mesmerized by a particular section of wall, outlined in yellow below:

I saw it as not - as it is in reality - an exposed section of an old wall of a Civil-war-era stable, but rather a fortified section of a phantasmagoric prison cell (a metaphoric echo of my inner Russian angst?). I imagined all kinds of Borgesian tales behind the incarceration of "prisoners" held here throughout the decades (... centuries, millenia, ... just when was it built?). Alchemists imprisoned by Illuminati minions devoted to keeping a lid on secrets best not revealed? Uber-geniuses - long since forgotten in the mists of time - who stumbled upon eternal and shocking truths, and were unceremoniously dumped into locked cells to live out the rest of their lives in abandoned sarcophagi? Perhaps these ruins were even once called home by the "Old One", who quietly inserted himself into our realm to taste life of the flesh; yearning - like many of Kazantzakis' heroes - to just revel in the struggle between earth and spirit. What became of the "Old One" I wonder; and is he - still? - struggling, even after the walls of his prison have crashed down around him so long ago? Or was something even more mysterious once living within these walls - something for which to this day there are still no words, no languages, that adequately describe "it" except in the vaguest, most imprecise terms - something that the prison was never meant to contain at all, but was rather built to prevent everything on the outside of its walls from ever getting in? What happened when the walls came down? Have the strange symbols been deliberately etched onto the textured walls by the creature (or creatures) that escaped? Are they ciphers of clues to what awaits us all? Clues to how we might find a way out of an invisible prison that still surrounds us? That contains our cosmos? That is our cosmos?

Such were my (admittedly, slightly bizarre) musings as I watched the stable wall ruin out my window, wondering if the rain was ever going to stop and whether my car was well enough to get me back home when it did. Finally, there was a small break in the clouds, and the rain slowed to a drizzle. I got out my camera, steadied it on the trunk of my car, and took a single shot. I knew how the final image would look even before I pressed the shutter; it would hint - but only hint - of the surreal Borgesian world (just on the cusp between the real and unreal) my mind's eye was lucky enough to briefly glimpse on this otherwise drab "uninteresting" day in the park. 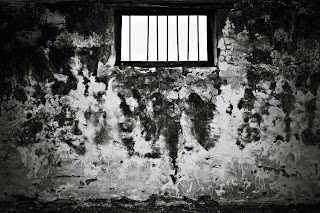 Andy,
Recently came across your Blog & am enjoying it. Thanks.

When I saw the image through the windshield, I thought you were headed where I went image-wise upon encountering a similar situation in the Shenandoah National Park (we live fairly close to one another). Instead of waiting for the rain to let up - it never did - I tried to use it to advantage. Take a look at this gallery for examples.

As always, very interesting to read. Your photo capture the possible dark history of that prison cell very well!

Moral of the story: Never give up!

The final photograph was worth the wait, Andy.